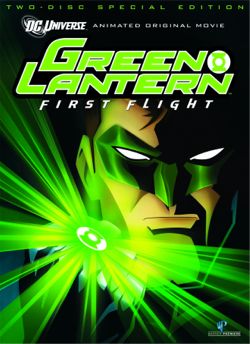 In an interview with Comicbookmovie.com, director Lauren Montgomery talked about her newest project, Green Lantern: First Flight. Montgomery was on hand at San Francisco’s WonderCon 2009, attending the premiere of her latest DC Comics film project, Wonder Woman, when she stopped to talk about the Green Lantern project. According to the director, the straight-to-DVD release will have more of a sci-fi tone as opposed to being a strict superhero movie. The film will also have elements of a buddy cop movie, as Montgomery told reporters that producer Bruce Timm summed up the film’s plot in four words, “Green Lantern: Space Cop.”

First Flight will follow the relationship of test pilot Hal Jordan and his mentor, Sinestro, as he trains to become a member of the Green Lantern Corps. Throughout the film, Jordan will have to make a series of moral decisions as his view of right and wrong differs from that of his mentor and of his supervisors, the Guardians of the Universe.

Some are comparing the plot of First Flight to that of the film Training Day. Jordan’s Green Lantern, voiced by Law & Order: SVU actor Christopher Meloni, will play the rookie cop role. Filling the role of the veteran corrupt cop will be Sinestro, voiced by Titanic’s Victor Garber. Since Sinestro is still a Green Lantern when the film begins, it is quite possible that the climax will involve Hal Jordan and the rest of the Green Lantern Corps bringing the villain to justice.

When it comes to the scope of how vast the Green Lantern Corps is, Mongomery confessed that is was a huge challenge. “We wanted to make the Green Lantern Corps feel like it's got a huge number of Green Lanterns to cover that vast universe, but when it's animation, you have to draw each and every one of them,” Montgomery said, “We tried to make it feel big, but we still have our own limitations -- we only have so many people available to draw all these characters.” Despite these limitations, popular Green Lanterns like Kilowog and Tomar Re are expect to appear in the film. Green Lantern: First Flight will arrive in stores on July 28th.

Green Lantern One Step Closer To His First Flight