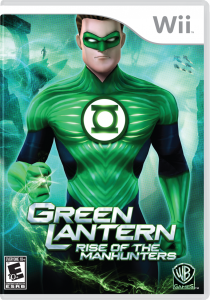 Warner Brothers Interactive Entertainment has announced a new video game that will tie in with the upcoming Green Lantern movie. The video game is called Green Lantern: Rise of the Manhunters, and it is set to be released on June 7, 2011. Green Lantern: Rise of the Manhunters will have versions for the Xbox 360, PS3, Wii, Nintendo DS and Nintendo 3DS. In the game, players take on the role of Hal Jordan, who is the man who became the first human Green Lantern. Players will be able to create an arsenal of ring constructs and take flight in outer space and beyond. Players will also utilize their Green Lantern power ring to build green energy weapons to battle the Manhunters, who are an evil android race. The game has enhanced graphics, 3D Capabilities, and co-op gameplay. Of course, no video game would be complete without its own Facebook page, so you can check out www.facebook.com/GreenLanternVideoGame to keep up to date on new and upcoming applications.