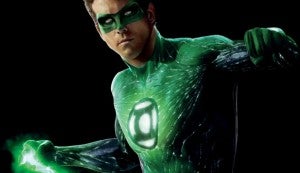 With a box office flop already under their belt, the filmmakers behind Warner Brothers' Green Lantern were already facing an uphill battle to make their planned sequel before The Avengers set the box office on fire last month.

Suddenly, DC Entertainment finds itself far more visible than it was a year ago, with Warner's studio heads wishing they had some of that money and, presumably, wondering why they were unable to get Justice League off the ground first in spite of the fact that Batman has been the superhero genre's most commercially viable character for over twenty years.

With new scripts in the offing for the Justice League and Wonder Woman film adaptations, as well as a handful of other projects planned, the future of the Green Lantern franchise was openly questioned in a Variety article earlier this week, and yesterday everyone was talking about it. There seems to be a consensus that, following the critical and commercial disappointment of last year's Ryan Reynolds vehicle, the studio probably should just throw up their hands and pretend the whole thing never happened.

There are a number of reasons that rebooting the franchise isn't a great idea at this stage, not the least of which is that when we were trying to come up with ways to do it, almost nothing on our list required an actual reboot.

The first and most obvious problem--and the one currently being faced by Sony's The Amazing Spider-Man--is that if you reboot a franchise that just recently had an installment in the theaters, fans are going to feel a bit ripped off that they spend half the movie rehasing an origin story that they've already got pretty well-in-hand.

In the case of Green Lantern, it's easier to work around because you can simply choose another GL and tweak the origin to meet the needs of John Stewart or Guy Gardner--but in the comics, Hal came before those characters and their history is intertwined with his. Removing him from their tales could prove problematic or even call for a wholesale change to their origin stories--something that gets comic fans good and riled.

While there are certainly fans out there who would love to see Kyle or Guy, the reality of it is a major motion picture would likely have to star either Hal Jordan or John Stewart and, while plenty of Justice League Unlimited fans would like to see John in the role, one thing to consider is that with Hal being the "main" Green Lantern and starring not only in his own book but also in Justice League, it would likely be seen as confusing to those imaginary new readers you're supposed to get from the movie if they came into comic shops expecting one character and saw another. It's the kind of minor concern that corporate loves to jump on, although it could likely be glossed over if a compelling case for using another character could be made (such as a desire to appeal to African-American audiences by having at least one Justice Leaguer of color).

There's also, frankly, a bit of reboot fatigue going on not just in the comics community but in movies too. Ten years or so ago, it was prequels that got all the hate, thanks to our friends at LucasFilm--but nowadays just mention the word "reboot" on an entertainment news comments thread and watch people moan and complain. It'll keep you entertained all day.

Lastly--and here's the thing that'll get ME fried in the comments--Green Lantern was an unremarkable movie, yes, but it wasn't as bad as it gets accused of. Were it not for high expectations and the massive popularity of superhero films at the moment, it's likely that people already would have forgotten about it and moved on. It's not a masterpiece by anyone's standards, but it's preposterous to lump it in with disasters like Jonah Hex or Batman & Robin. I just don't see Green Lantern being remembered as that kind of travesty in the long run; it's more likely that once another bat film or two comes out, it'll fade into obscurity. There's a strong base there to work from, though, and to abandon a film that's already done all the hard work of universe-building and character development for you seems self-defeating.

Green Lantern: The Case Against a Reboot