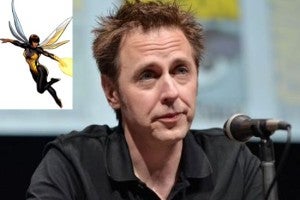 Remember when Robert Downey Jr. hurt his ankle on the set of Iron Man 3 and production was delayed? Or when Jamie Alexander slipped in the rain on the set of Thor: The Dark World and suffered a serious back injury that knocked her out of filming for a month? Well, there’s been an injury on the set of another Marvel Studios film, but we’re not expecting it will result in production delays.

Earlier today, Guardians Of The Galaxy director James Gunn tweeted, “Today we had our first onset injury - and it was me! I was stung on the ear by a wasp!” Of course, it’s not so much that James Gunn suffered a minor injury that’s interesting, but it’s interesting what caused his injury.

Mention a wasp on a Marvel Studios set, and Marvel fans are bound to start thinking about The Wasp. In the responses to Gunn’s tweet, there is already speculation that he’s hinting at a Janet van Dyne (a.k.a. The Wasp) cameo in Guardians Of The Galaxy.

At least James Gunn didn’t get bitten by a spider, because it really would have sent fans into a frenzy, thinking he was hinting at an intercompany crossover with Sony.

Guardians Of The Galaxy is set to be released in movie theaters on August 1, 2014.