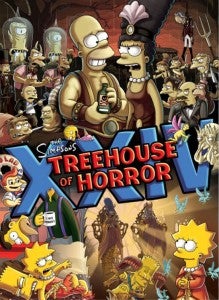 Director Guillermo del Toro did the opening segment for The Simpsons ' 24th annual Treehouse of Horror special, which will air on Sunday night.

Guillermo del Toro  packed the opening with monsters and classic characters from horror films throughout history. Some of the references are to his own films like Hellboy and Pan's Labyrinth, while other references even call back to past episodes of The Simpsons. MoviePilot (in the video below) took on the arduous task of attempting to identify all the references, and they came up with over sixty of them. Were there any they missed?

Treehouse of Horror XXIV consists of three stories in one episode. In the first of three spine-tingling stories, Homer rides around Springfield wreaking havoc in a rhyming take on a popular children’s tale. In “Dead and Shoulders,” Bart is beheaded during a kite accident, his head is attached to Lisa’s body and they must live together as one. The final terrifying tale, “Freaks no Geeks,” features Mr. Burns’ traveling circus, The Burnsum and Bailey Circus, which has stopped in Springfieldland in the 1930s. Trapeze artist Marge and Strong Man Homer are performers and things go awry when circus freak Moe starts to make advances towards Marge.