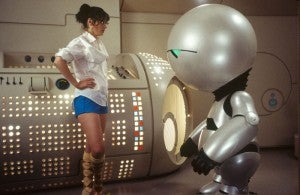 Today is Douglas Adams's 61st birthday, and Google is celebrating with a tribute to his best-known and best-selling work, The Hitchhiker's Guide to the Galaxy. The novel, based on a BBC radio play by Adams, spun out four sequels, three comic books and two film adaptations in the thirty years following its publication. The franchise centers around Arthur Dent, who survives the destruction of Earth by hitching a ride with the cosmic construction crew responsible for it. Adams died in 2001, but the work has continued since--one of those film adaptations, a 2005 American version, and a 2009 Hitchhiker sequel written by Artemis Fowl author Eoin Colfer, have been released since. "Douglas Adams was a genius. He was a profound and brilliant British humorist who was also a very reluctant novelist," friend and fellow British storyteller Neil Gaiman told The Washington Post.

Hitchhiker's Guide to the Galaxy Takes Over Google