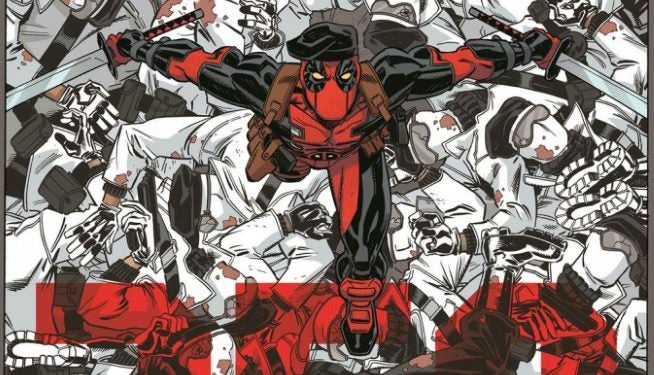 Marvel Comics has been teasing out the Death of Deadpool in the character’s 250th solo issue (Deadpool #45 of the current series), and the release date is finally here.

So how does Wade finally go? Find out below.

The solicitation text, cover, and previews for the issue all led us to be believe that Deadpool would die in glorious battle with Flag-smasher and ULTIMATUM. Turns out that’s not the case. Instead, Deadpool survives that battle, and lives long enough to celebrate with his friends.

And then Secret Wars happens.

The mainstream Marvel Universe and the Ultimate Marvel universe collide, the opening scene of Marvel’s mega-event, and Deadpool and his friends are burnt up in the explosion that destroys their Earth.

This is…a little disappointing. We all knew Secret Wars was coming, but to tease out Deadpool’s death like an event, only to have him die off the same way every single other person on his Earth is going to die seems somewhat anti-climactic.

You could also read into this as a bit of meta-text, with Deadpool ready to happily continue his adventures, only to have that whole possibility shattered by the latest comic book event.

As mentioned, Deadpool is dying the same way pretty much everyone on Earth is dying, but it is interesting that the only Secret Wars tie-in he’s involved in is Deadpool’s Secret Secret Wars, which is actually a flashback series to the original Secret Wars. Perhaps his death is unique compared to the other heroes of the Marvel universe.

How Does Deadpool Die in Deadpool #250?