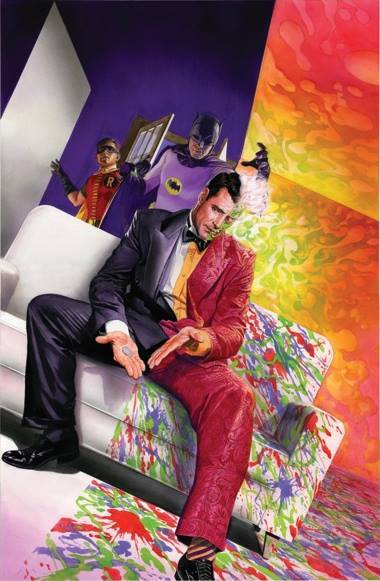 While the 1960's Batman series brought colorful interpretations to many of of the Caped Crusader's rogues gallery, there was always one glaring omission: Two Face.

Thankfully, DC Comics is rectifying that with "Batman '66: The Lost Episode #1." A DC digital first, the one-shot will adapt an unused story outline that would have brought Harvey Dent into Adam West's camp-filled world. And though a variant cover by Jose Luis Garcia Lopez has already provided a look at "Batman 66's" Two-Face, legendary artist Alex Ross has now given a cover of his own. It's the most photo-realistic imagining of what could have been.

With a pop-art secret lair and floral-print suit, the look certainly fits within Batman '66's groovy visual aesthetic. Surprisingly, it's actually a bit more tame then the costume Tommy Lee Jones sported nineteen years ago in Batman Forever. But then again, that film could probably teach Batman '66 a few lessons in camp.

"Batman '66: The Lost Episode #1" is written by Len Wein, based off of a story by Harlan Ellison, and illustrated by Jose Luis Garcia-Lopez and Joe Prado. It goes on sale November 19th.

How Two-Face Would Have Appeared on Batman '66