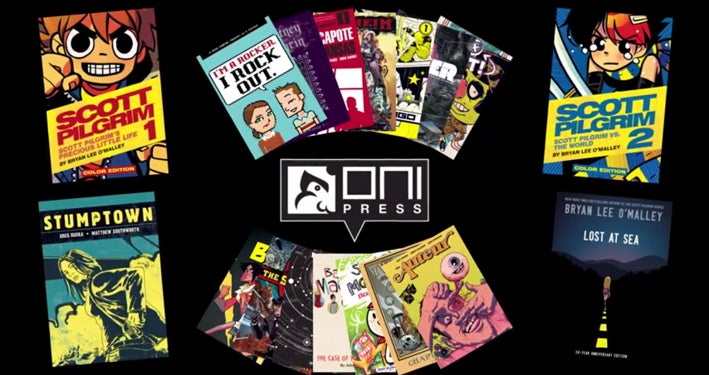 Humble Bundle and Oni Press have teamed up to offer $360 worth of Oni’s best indie comics in a pay-what-you-want package, the Humble Oni Press Comics Bundle.

The bundles offers the first volume of Buzz!, The Sixth Gun, Letter 44, Bad Machinery and Sketch Monsters, as well as the first issues of I Was The Cat and The Auteur, for whatever the buyer feels like paying.

Paying more than the average price unlocks the first volume of Courtney Crumrin, Diesel Sweeties, Helheim, Megagogo, and The Bunker, plus Capote in Kansas and Down Set Fight.

For $15 or more, also receive Bryan Lee O’Malley’s Lost At Sea and the first two volumes of Scott Pilgrim, as well as the first volume of Greg Rucka’s Stumptown.

The comics are made available in multiple formats including CBZ, PDF and ePub, and a customizable portion of whatever you chose to pay goes towards the charitable efforts of Direct Relief.

As with all of these Humble Bundles, it will only be available for two weeks, and more comics will be added during that time.

It’s good comics for a good cause, so what are you waiting for?

Humble Oni Comics Bundle Lets You Pay What You Want For The Sixth Gun, Scott Pilgrim, Stumptown And More