The producers and filmmakers behind The Hunger Games, along with franchise star Jennifer Lawrence, have issued a pair of statements in response to the death yesterday of Academy Award-winning actor Philip Seymour Hoffman, who played Plutarch Heavensbee in The Hunger Games: Catching Fire and was expected to reprise that role in both of the upcoming Mockingjay adaptations, due out on November 21, 2014 and November 20, 2015.

Jennifer Lawrence, Mockingjay director Francis Lawrence, author Suzanne Collins, and producers Nina Jacobson and Jon Kilik released a joint statement saying, “Words cannot convey the devastating loss we are all feeling right now. Philip was a wonderful person and an exceptional talent, and our hearts are breaking. Our deepest thoughts and condolences go out to his family.”

Added Lionsgate, the studio behind the films, added, "Philip Seymour Hoffman was a singular talent and one of the most gifted actors of our generation. We’re very fortunate that he graced our Hunger Games family. Losing him in his prime is a tragedy, and we send our deepest condolences to Philip’s family."

According to Entertainment Weekly, the filmmakers have no idea how they're going to deal with the loss of Hoffman--or at least aren't saying--but they're confident that it won't impact the release dates for the films. 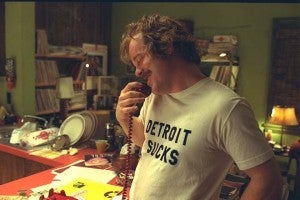 On a similar note, Almost Famous director Cameron Crowe took to his personal website today to talk about the famous "uncool" scene from the film, which a number of articles have cited as one of Hoffman's finest performances and which Crowe said became the unintentional heart of the film on the strength of Hoffman's take on the scene.

"My original take on this scene was a loud, late night pronouncement from Lester Bangs. A call to arms," Crowe explained. "In Phil’s hands it became something different. A scene about quiet truths shared between two guys, both at the crossroads, both hurting, and both up too late. It became the soul of the movie. In between takes, Hoffman spoke to no one. He listened only to his headset, only to the words of Lester himself. (His Walkman was filled with rare Lester interviews.) When the scene was over, I realized that Hoffman had pulled off a magic trick. He’d leapt over the words and the script, and gone hunting for the soul and compassion of the private Lester, the one only a few of us had ever met. Suddenly the portrait was complete. The crew and I will always be grateful for that front row seat to his genius."