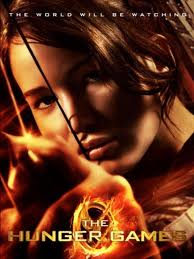 With slightly less than a month to go for the film adaptation of Suzanne Collins' "The Hunger Games," movie theaters have begun pre-selling tickets.  Yet the film doesn't have a rating.  What gives? It's quite possible that Lionsgate (Studio/Distributor) is still haggling with the Motion Picture Association of America (MPAA) over whether or not the film should get a PG-13 or a R rating.  And while the book were labeled as 'Young Adult' (ages 12-18), I've always thought that the overwhelming majority of the readership had to be near the higher end of that scale.  Which is why I think that while a PG-13 rating would be more profitable at the box office, the movie really needs a R rating.  Why? (careful—spoilers ahead) Violence.  There is a lot of it, and it sure as heck isn't for the lighthearted.  After all, we're talking about 24 people that are put into an arena to kill each other.  It would be one thing if we were talking about adults here but these are CHILDREN.  Kids killing kids, and they aren't doing it in kindhearted ways.  Rue's death is tough, and Cato's is absolutely brutal.  I can't comprehend how they'll show half of these deaths without a R rating.  Reading a story is one thing for a young adult.  Visualizing it is something completely different. Nudity.  Katniss has her clothes off quite a few times in the book.  And there are other characters that go completely nude as well (Johanna Mason, for one).  Sure, the nudity could be dressed down and inferred but it's a key element of the book.  The Tributes are pieces of meat that need to be stripped bare and made to be presentable. Oppression. The Capitol is in control, and the 12 Districts do as they are told or else.  The central theme of this book/movie is that of oppression.  The Capitol flaunts its power and reminds the people in the Districts of who is in charge by doing the unimaginable—taking 24 children from the Districts and killing all but one.  From the run down Districts to the starving people who live in them (and what they do to survive), it's important to portray this dichotomy exactly like the book.  Because, in the end, it's what leads to revolution. Which is why this film needs a R rating.  Not only to stay true to the book, but because young kids—I'm talking you 13-14 year olds—don't need to see the stuff that happens in this film. What do you think?  Should 'The Hunger Games' have a PG-13 rating or a R rating?