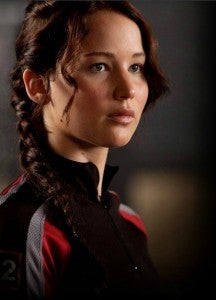 Lionsgate continues to rewrite the book on how to market the run up to a film being released.  Their masterful marketing for 'The Hunger Games' continues today with an announcement of 24 advance screenings to celebrate 24 days until the film hits theaters, as well as the 24 tributes in the story. Here's the deal on the screenings, which are sponsored by Nook by Barnes & Noble: Fans can go to this site to see where the screenings will be shown.  Each city has a unique hashtag to be used on Twitter, and tomorrow, the top four cities with the most Twitter volume will be announced.  Once unlocked, fans will be able to enter to win tickets to those locations (we'll get the details on that tomorrow, we're guessing). In addition, Barnes & Noble is giving Nook fans in select cities the opportunity to gain exclusive access to see The Hunger Games before its official theatrical release. On March 10, while supplies last, the first customers to purchase any of Barnes & Noble's award-winning Nook devices -- including Nook Tablet, Nook Color or Nook Simple Touch -- at select Barnes & Noble stores will receive two complimentary tickets to the official advance screening on March 21. It is absolutely BRILLIANT.  I've already seen certain hashtags blowing up on Twitter, and the number of tweets of people asking what #HungerGames24 is all about. 'The Hunger Games' is adapted from the bestselling novel of the same name by Suzanne Collins.  The film hits theaters March 23rd.

Hunger Games To Have 24 Advance Screenings