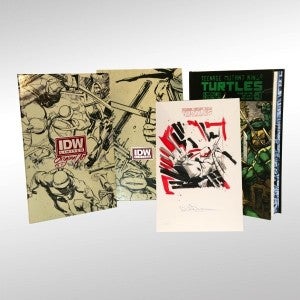 Earlier today, IDW Publishing announced toe formation of IDW Limited, a collectible publishing arm that will apparently specialize in low print run, deluxe edition comics publishing. Its first release, Teenage Mutant Ninja Turtles, Vol. 1, Change Is Constant, drew praise from the characters's co-creator, Kevin Eastman. "This edition of Teenage Mutant Ninja Turtles, Vol. 1: Change Is Constant is nothing short of spectacular," Eastman said. "The Turtles have been presented in a variety of formats over the years, but this book is truly a prized collector's item for Turtle fans." The books are being released in tiers, depending on how fans are willing to spend and what kind of extras they want with their books. The tiers appear to be named after Johnnie Walker Scotch whiskey:

The Red Label Edition is $125, the Black Label Edition is $250 and the Blue Label Edition is $350. The market for custom binding of comics has grown in recent years, with people like Single Bound Studios often operating with a wait list, so it's perhaps not surprising that a publisher would believe fans would pay a significant sum to get official, exclusive bound editions of their books. IDW seems the correct place to start, given that they do the high-quality, sought-after "Artist's Edition" hardcovers that collect classic stories from other publishers as coffee table books. "We wanted to give fans a top-of-the-line creative experience with the books they love in a truly special format," said IDW Limited director Jerry Bennington. "These rare editions will not only be special and limited in quantity, they'll also include unique content found nowhere else. This may be the only way most fans could ever hope to own a signature, sketch or illustration from one of their favorite artists or creators." According to the press release, "In addition to Teenage Mutant Ninja Turtles, fans can also expect a complete line of limited edition books and merchandise of their favorite titles including Transformers, G.I. Joe, Alan Robert's Crawl To Meand menton3's Monocyte this fall, and many more to follow."