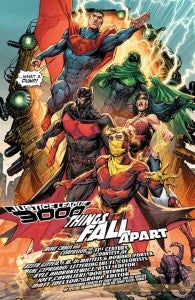 For at least the fourth time as a writing team, today's issue of Justice League 3000 features writers Keith Giffen and J.M. DeMatteis using the title "Things Fall Apart" for the issue's story.

The first time I can remember the pair using the title--a reference to a Yeats quote from the poem "The Second Coming"--was in Justice League Europe #31, part of the then-current Breakdowns crossover between Justice League Europe and Justice League America. Even before the pair started regularly using the title together, though, DeMatteis wrote a Captain America story titled "Things Fall Apart" back in 1984's Captain America #296. When asked how many times he's used it as an issue title, his response?

This is a bit reminiscent of TV auteur Aaron Sorkin, who has used the title "What Kind of Day Has It Been" for the Season One finale of SportsNight and the series finale of Studio 60 on the Sunset Strip after having first used it as an episode title during the second season of his NBC hit The West Wing. Ironically, there was also an episode of The West Wing titled, you guessed it, "Things Fall Apart." Here's a cool idea: the person who can e-mail russburlingame@comicbook.com with the most complete list of "Things Fall Apart" issues, we'll give you free digital copies of the first two issues of Justice League 3000. If it's a tie, we'll just pick the winner at random, or (if fewer than five winners) just give it to each of the submissions.

In Justice League 3000, Things Fall Apart For Giffen and DeMatteis Yet Again