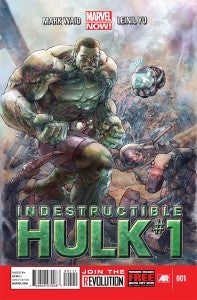 Marvel Comics has released a first look at the cover of The Indestructible Hulk #1 by the Superman: Birthright creative team of Mark Waid and Leinil Francis Yu.

The announcement, which comes on the heels of the Gillen/Land Invincible Iron Man and Aaron/Ribic Thor: God of Thunder confirmations on Monday and Tuesday of this week, makes the comics internet three-for-three in their predictions regarding last week's cryptic Marvel teasers. That perfect record is likely to be shattered eventually, as Si Spurrier has nixed rumors he'll be taking over an X-Men title, but in the meantime we've got tomorrow's already-confirmed Deadpool announcement to look forward to, featuring new art by The Walking Dead's first artist, Tony Moore.

"Honestly, it's a lot like my experience with Fantastic Four," said writer Mark Waid, whose run on that title with Mike Wieringo became a fan-favorite, in a joint interview he and Yu did with CBR. "I never thought I'd want to write this book until it was offered and I began thinking about it. So many great writers, so many landmark moments -- it was intimidating, still is. But the more I began to think about the relationship between Bruce and Hulk, the more I began fantasizing about what it would be like to take the core concept a little more "back to center" like we did with Daredevil, the more intrigued I became."

He added that, like his run on Daredevil, the character will "turn a corner and grow, taking a little more joy in life and becoming less self-pitying.

Added Yu, "Remember Banner's line from the Avengers movie? His secret is that he's 'always angry.' Well, I was always drawing the regular Wolverine and Hulk in the Ultimate Universe." He said that means he doesn't have to do very much, other than watching the character's height, to translate to this new iteration of The Hulk.

The Indestructible Hulk #1 will hit comic book stores in November.