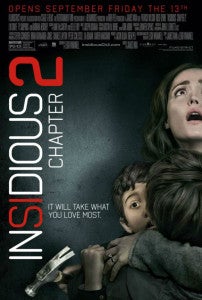 , which had been predicted to make between $30 million and $35 million this week, now looks to be on a pace to deliver a $43 million opening weekend, and the enthusiasm appears to be lifting all boats as The Family and Riddick also performed better than expected on Friday. The Family, projected at the start of the weekend to make around $11 million, may be headed for a $15 million weekend according to Deadline.

Insidious Chapter 2 is reported to be director James Wan's final outing in the "scary movie" genre before he starts pursuing other avenues, starting with the seventh in stallment of the Fast & Furious franchise expected out next year. It stars Rose Byrne of X-Men: First Class as the mother in a family who are struggling to find out why they're haunted.

The Family, a dark comedy co-written and directed by Leon the Professional's Luc Besson, is suffering from a C CinemaScore and audience indifference stemming from a marketing campaign that's not communicating the "dark" part of "dark comedy" very effectively. It also can't hurt that leading man Robert DeNiro has already done about a hundred movies like this, or that it's been a decade since leading lady Michelle Pfeiffer was a serious draw at the box office.

If the overall weekend rides higher than last year--which it's projected to, by double-digit percentages--it could very well lift the week's projected #3 movie, Riddick, to help offset some of last week's disappointing opening weekend. Either way, the movie cost only $38 million to make and should make that back by this time next week.