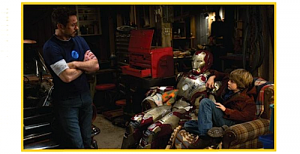 Following his memorable turn as Harley Keener in Iron Man 3, young actor Ty Simpkins has been making the media rounds a bit, talking about the experience of working on his first truly massive studio film, as well as what, if anything, his future might hold in the Marvel Cinematic Universe.

Simpkins joined ComicBook.com for a few questions last night. With a three-picture deal with Marvel under his belt, Simpkins had the odd experience of sharing as much screen time with Robert Downey, Jr. as almost anyone in Iron Man 3, while meeting very few of his co-stars until after production had already wrapped due to the nature of his story arc. He also shared with us some of his hopes for the future of his character.

ComicBook.com: What was it like working with Robert Downey, Jr.?

ComicBook.com: Did you get to meet the rest of the cast?

ComicBook.com: Did you sign on for a multi-picture deal?

Simpkins: I have a three-movie contract; now there are two more movies left in my contract but I have to earn those role of course.

ComicBook.com: They leave you pretty wide open. Do you have an idea of where you'd like him to be in a few years? 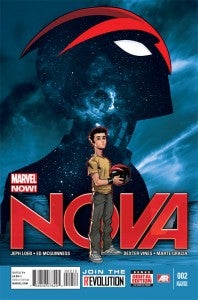 ComicBook.com: Well, a lot of people expect Nova to show up in Guardians of the Galaxy, so if that does happen you'd know pretty quick.

ComicBook.com: You didn't get to wear the armor; would you like to do that eventually?

Simpkins: Yeah--I mean, I should definitely get to at least try on the suit, maybe trash a few cars--but I did get to try on the finger. That was pretty fun in the scene.

ComicBook.com: How much of your stuff ended up getting cut?

Simpkins: I got to be a hero--I got to save my bully, and they did cut out a small bit of something that didn't really matter but it was still pretty cool to film. When the suits are trying to break out of the store, I'm building a science project of mine and I put in this stuff in a volcano, a papier-mache volcano. I put in this liquid stuff and it kind of just fizzes and I back up but then I hear something and I look out the window and it's the Iron Man suit trying to break out. And there was another scene where a girl kisses me that got cut.

ComicBook.com: For that sequence with the suits, it felt almost like a horror movie beat. Did you have to play it that way, that it would be a strange, scary thing?

Simpkins: Except for Gary. Gary realized!

ComicBook.com: Right! But mostly people didn't really know. Was it cool for you to be kind of on the inside?

Simpkins: Yeah--I thought that was pretty funny. I liked being the inside man kind of knowing everything that was actually going on but I don't know if I knew who Tony Stark was or not!

ComicBook.com: Were you a big fan of the Marvel movies prior to this? Your age comes into play at some point with all these PG-13 movies!

Simpkins: I did enjoy Marvel movies before. Really the only Marvel superhero I knew before Iron Man came out was the Hulk--and Spider-Man! So I did see those--and X-Men, of course, everyone knows X-Men. They're like Batman and Superman, everyone knows them. I did enjoy the Marvel movies, especially Hulk and Spider-Man. I actually didn't see X-Men movies but I knew who they were.

Mortal Kombat 11 Update Makes Some Changes to the Characters