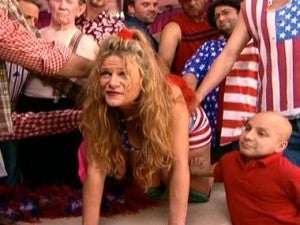 She's played a "daytime hooker" on My Name is Earl and werewolf by night on True Blood, but Independent Spirit Award-winning actress Dale Dickey has now stepped into the Marvel Universe as "Mrs. Davis" in Iron Man 3.

In a July interview with Knoxville.com (unearthed this week by Comic Book Movie), the actress's blog reveals that she's shooting now for a role that was cast over a month ago--and it's apparently one that's got more to it than meets the eye.

“I'm filming now. That's it. They asked my agent not to put anything in the trades when I was cast over a month ago, so they are trying to keep as much mystery as possible.”

Dickey reportedly didn't break the vow of confidentiality herself, and only confirmed involvement after her character appeared on IMDb.

Iron Man 3 heads to theaters on May 3, 2013, and is in production now. The film is directed by Shane Black and stars Robert Downey, Jr., Gwyneth Paltrow and Ben Kingsley.

Naruto Debuts an Original Fight as Konohamaru Takes on Jigen