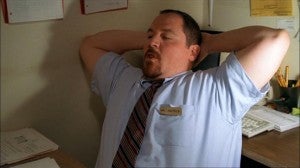 While he may not be directing Iron Man 3, that doesn't mean Jon Favreau, who directed the first two and executive-produced The Avengers, will be leaving Tony Stark entirely to his own devices when Kiss Kiss Bang Bang director Shane Black takes over the franchise this time around. On the contrary, the Daredevil star remains very involved with the film's production, according to an interview with The Hollywood Reporter.

"I was just talking to Shane Black and Downey and look, I think it’s a really smart way to go," the filmmaker told THR. "AfterAvengers, you want to start with something really bold and inspired, and if you’ve ever seen Kiss Kiss, Bang Bang, you’ve seen that when Downey and Shane get together, interesting and unexpected things happen. I’m happy to see that it’s taking a bit of a tonal shift from The Avengers and it’s going to be something completely different and exciting, and I’m happy to be a part of it."

Pressed for details on what kind of "tonal shift" the franchise could be taking, Favreau reassured fans that they wouldn't be taking Tony Stark the dark and gritty route anytime soon, saying that instead the changes would simply reflect a more "offbeat" take on the character, which isn't entirely surprising if you've seen Kiss Kiss Bang Bang but does seem to poo-poo those persistent rumors that the seminal Iron Man storyline Demon in a Bottle might be part of Ol' Shellhead's third outing.

The director also said that he would be "very involved" day to day with the production on the sequel, and that he feels personally connected and invested in the Iron Man franchise.

Iron Man 3 is filming in North Carolina and China, and is scheduled for a May 3, 2013 theatrical release.