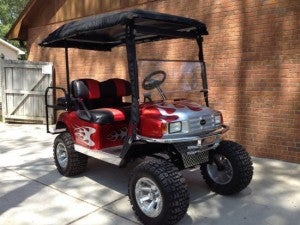 has picked back up in Wilmington, N.C., but how is Robert Downey Jr. going to get around with his injured ankle? Well, apparently studio executives plan on transporting him via a golf cart, but not just any old golf cart will do for the star of the show.

According to a post on Reddit.com, the local Wilmington movie studio contracted a custom golf cart design company to supply golf carts for transportation around the Iron Man 3 set. Because there is great secrecy surrounding Iron Man 3, there was a special golf cart built just for Robert Downey Jr.

The Robert Downey Jr. Iron Man 3 golf cart can hit a top speed of 30 miles per hour, which might seem slow for the jet-setting Tony Stark but is plenty fast for a golf cart. The custom golf cart was designed by www.willsgolfcars.com.