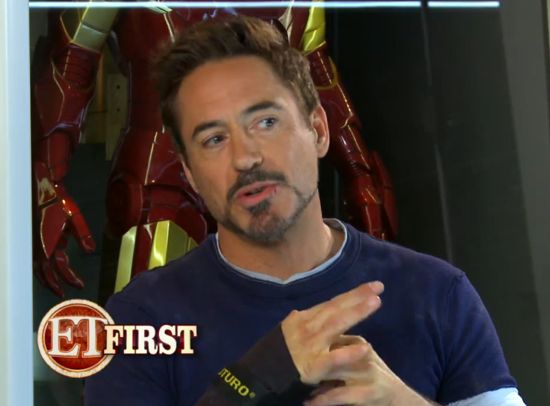 Nancy O’Dell of Entertainment Tonight paid a visit to the set of Iron Man 3, where she chatted with Robert Downey Jr. and Gwyneth Paltrow. No major Iron Man 3 spoilers here, as O’Dell stuck to general type questions. There are some Iron Man 3 scenes mixed into the set visit, but they are the same scenes from the just released Iron Man 3 trailer.

O’Dell also asked, “So when you put on the suit again, how does it feel from the very first time you put on the suit?” Downey Jr. replied, “More comfortable every time.” When O’Dell followed up asking if it was because of the actual physicality of the suit, Downey Jr. said, “No, because they keep designing it to make it more sustainable so we can do more stuff in it.

In talking with Gwyneth Paltrow, O’Dell asked, “What’s it like working with Robert Downey again? Do you guys just fall right back in sync?” Paltrow replied, “Yeah, we do. We’re like…We really are like family.”