As we recently reported, sources have told us that production on Iron Man 3 is expected to begin earlier than originally anticipated. We’ve also been snooping around for any info on potential villains for Iron Man 3, but no one seems to have any official word yet. However, some things we have uncovered about the shooting location and the choice of production facility does lend itself to some rather interesting Iron Man 3 villain speculation.

While tax credits played a role in the choice of the coastal town of Wilmington, North Carolina as a filming location for Iron Man 3, the production facilities at EUE/Screen Gems Studios were also a factor. EUE/Screen Gems Studios has a 37,500 square foot sound stage that includes a special effects water tank. Parts of Journey 2: The Mysterious Island, which is scheduled to be released on February 10, were also filmed at this same studio, utilizing a water tank that was 80 feet in diameter and 20 feet deep.

Much of the initial online speculation about potential Iron Man 3 villains has revolved around Mandarin or The Ghost. With his martial arts skills and his ten rings of power, the Mandarin would certainly make for an interesting villain. However, at the Long Beach Comic Con, Iron Man 3 director Shane Black reportedly dismissed Mandarin as a “racist caricature.” Now, Black could have been making a calculated statement to throw fans off the trail, but the last superhero movie involving rings did not do particularly well at the box office. Would Marvel really want to chance including anything in their movie revolving around power rings?

After the Mandarin, The Ghost seems to be the most frequent Iron Man 3 villain name popping up online. However, most of the speculation around The Ghost is just geared around that he’s the type of villain that would fit well into a Shane Black film. The fact that The Ghost is a superhacker would give the movie a very timely and relevant feel, but The Ghost’s other powers which include invisibility and intangibility could be difficult to translate on screen.

So while the Mandarin and The Ghost are possibilities, we think there might be another possibility. As already mentioned, Marvel Studios is shooting in a coastal town in a facility that boasts a special effects water tank as one of its selling point. The location lends itself to a water-based villain, which got us thinking.

In Iron Man 2, there were several easter eggs involving Atlantis, which led to lots of speculation that Prince Namor, the Sub-Mariner would be appearing in an upcoming Marvel Studios film. There have also been reports that a giant sea creature called Leviathan will make an appearance in The Avengers, which has led to speculation about Atlantis and Prince Namor, the Sub-Mariner in that movie as well. 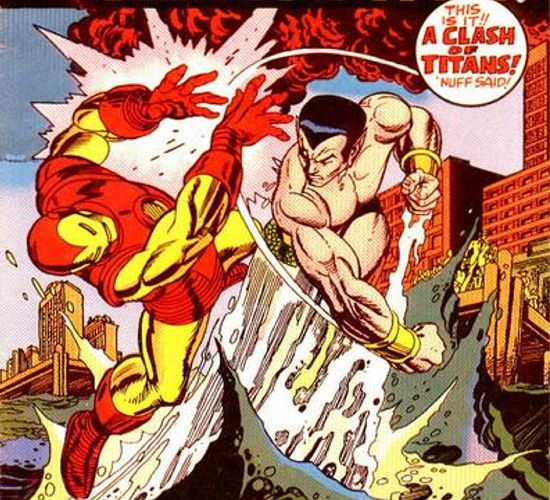 Of course, Loki is the main villain featured in The Avengers, so if Prince Namor, the Sub-Mariner does make an appearance it’s likely in a supporting role. Knowing how Marvel Studios likes to tie their films together, it would make sense that they might want to lay the groundwork in The Avengers for the villain in their next big film, which is Iron Man 3.

Since Justin Hammer was introduced in Iron Man 2, it would seem like a natural lead-in to “Demon In A Bottle,” since Hammer was the main adversary in that storyline. And guess who else was also involved in that storyline: Prince Namor, the Sub-Mariner. In fact, the beginning of “Demon In A Bottle” revolved around a battle between Iron Man and Prince Namor, the Sub-Mariner.

So you have hints of Atlantis in Iron Man 2, rumors of Atlantis in The Avengers, a coastal town filming location for Iron Man 3, a production facility known its special effects water tank, and a water-based character involved in a classic Iron Man storyline that also included a villain introduced in Iron Man 2.

Maybe, the storyline isn’t a straightforward adaptation of “Demon In A Bottle,” but it contains several elements from the storyline. Imagine Justin Hammer as the intellectual villain, who possible manipulates Prince Namor, the Sub-Mariner into battle with Iron Man. The Sub-Mariner has been portrayed as both a villain and a hero in the comics, and he could always start out as a villain in the movie, before flipping to the hero side. In the comics, Sub-Mariner and Iron Man have fought several times in the past for various reasons.  Such a plot would certainly make for both an intellectually stimulating and action-packed movie.

One more thing, guess what other Marvel character plays a role in the "Demon In A Bottle" storyline? The answer is Ant-Man, which is another character that Marvel Studios is rumored to be developing for the big screen. Remember what we said about Marvel Studios liking to tie their films together. Food for thought?

The Wonderful World of Disney: Magical Holiday Celebration: How To Watch And What Time Does It Start

Matthew Morrison as The Grinch Has the Internet Flipping Out