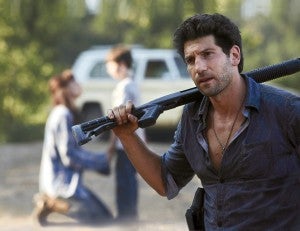 NOTE: This article contains potential spoilers for upcoming episodes of The Walking Dead on AMC, which are pure conjecture and may or may not occur. It also contains very real spoiler for the first year of Robert Kirkman's The Walking Dead from Image Comics, so if you haven't read that yet you should do so before reading this article.Seriously, go read it. It's great.Variety

is reporting that John Bernthal, the actor who plays Shane Walsh on AMC's hit TV adaptation of Robert Kirkman and Charlie Adlard's The Walking Dead, is being considered for the lead role in Frank Darabont's new period crime drama, L.A. Noir, which begins shooting for TNT soon.

Darabont, who was the showrunner on The Walking Dead's first season and directed its pilot, was let go before the second season after reportedly being unable or unwilling to work with the network on budget and timetable restrictions. Despite the red flag that the loss of Darabont--director of The Shawshank Redemption and The Green Mile--raised for many fans and critics, the second season of The Walking Dead opened to record ratings for AMC and largely positive reviews.

It was widely reported not long ago that one of Darabont's regular actors had asked to be released from their contract to follow the filmmaker out the door, then reconsidered only to be told that their character was being written out of the show anyway. Bernthal had not worked with Darabont prior to The Walking Dead (although a few of the show's other actors had) and was not widely considered to be the actor in question.

The actor is said to be circling the role of Joe Teague in L.A. Noir, a Los Angeles police officer who plays a central role in the effort to bring down notorious gangster Mickey Cohen. As he did with The Walking Dead, Darabont wrote the script, based on the book by John Buntin (and with no relation to the video game franchise) and will direct the pilot when cameras roll.

Bernthal's character in The Walking Dead, Shane, has been increasingly at odds with the rest of the group and particularly ringleader Rick Grimes throughout the second season, and previews of February's return to the airwaves don't look like that particular plot thread is letting up. Readers of the comic book source material will know that Shane didn't last nearly as long in the comics as he has in the TV show already, and that his death is one of the events that forever changes the group dynamic and the lives of some very important characters.

Certainly the death of a character in the comics doesn't mean much for the television show, which has introduced new characters with abandon and killed off familiar characters from the comics well before their stated expiration date (as well as leaving Shane in the lineup for substantially longer than most fans expected).

[Check out this week's Panel Discussions podcast, featuring an interview with Rus Wooton, letterer on The Walking Dead comic book.]

Kirkman, who is a producer on the television show, has said that he enjoys playing with a version of The Walking Dead where he didn't kill off the character so early, as he has since felt that maybe he missed out on some storytelling opportunities by losing Shane so quickly. It's certainly created opportunities for Bernthal, who in addition to apparently being courted for Darabont's next project has recently completed filming an upcoming movie co-starring Susan Sarandon and Dwayne "The Rock" Johnson, according to Variety.

The Walking Dead returns to finish out its second season on February 12.

Is Darabont's LA NOIR the End for THE WALKING DEAD's Shane?