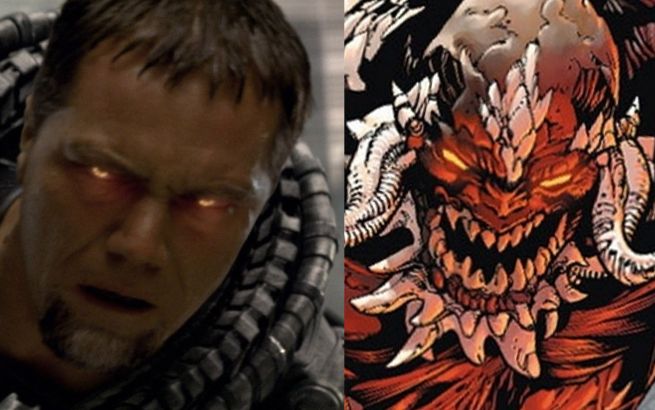 Could Man of Steel villain Michael Shannon appear in the upcoming Batman V Superman: Dawn of Justice? From what we're hearing, all signs point to yes.

This isn't the first time we've considered the possibility, of course; there was speculation the moment Zod died that his body, or at least his armor, would play a role in any potential sequel, with many fans speculating that the Kryptonian battle armor could be modified to serve as Lex Luthor's green and purple battle armor from the comic books.

And then, back in November, there was this shot of Shannon hanging out with Henry Cavill near the set of Batman V Superman in Chicago:

Here's what we've heard: General Zod won't be up and pontificating in Batman V Superman...but that doesn't mean no Michael Shannon.

The villain seems to be key to the DC Cinematic Universe going forward: his corpse is stolen (or perhaps just acquired, given his military contacts in most versions of the modern mythology) by Lex Luthor and experimented on, presumably in the hopes of finding a weakness to exploit against Superman. In the course of his experimenting, we've been told that he "triggers the Doomsday genome," causing the corpse to reanimate as the mindless killing machine at the center of The Death of Superman.

Doomsday rumors have been omnipresent for months, and while it seems like a waste to use the character and not do the Death of Superman story, there are some obvious upsides to his inclusion, not least of which is that there are very few villains who can be a physical menace to Superman and many of those are likey characters they'd like to dedicate a full film to in the future. Doomsday is essentially one long fight scene incarnate, so if they can blow audiences away with that scene, why not?

Once he's Doomsday, of course, it's likely that Zod's body will take on the appearance of Doomsday, and from that point on he could be anybody. Another actor could do the heavy lifting, or even a stunt performer, none of whom would necessarily have been recognizable on set, whereas any extended period of time that Zod spent would have been noted. Meanwhile, Shannon could have done whatever mocap wasn't already catalogued from Man of Steel on a closed set, even far away from the action if needed, if they decided that it would be him to do Doomsday.

In the comics, Doomsday was created by a Kryptonian scientist called Bertron who was attempting to speed up evolution to create a perfect living weapon. It backfired, killing Bertron and his crew, and was ultimately caught, subdued and fired into deep space, ostensibly on a course where it would never encounter a populated world. Instead, it crashed on earth was buried in rural Ohio for years until the monster awoke and smashed his way to Metropolis. 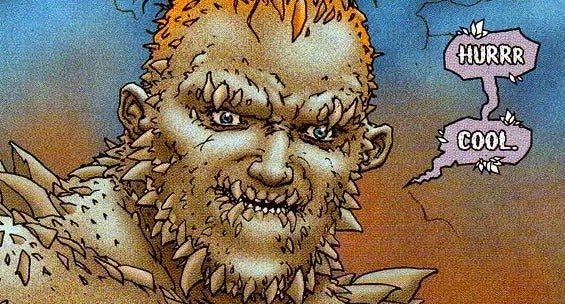 In both Smallville and All-Star Superman, Doomsday has been a character with a sentient "host," brought on by genetic manipulation. It sounds like that's the route they'd be taking in Batman V Superman, with the host in this case being Zod and thus providing an explanation (his innate invulnerability) as to why he was invulnerable and couldn't be easily taken down before the Doomsday genome took over fully.

It's also possible that, given Zod's heritage as a Kryptonian bred specifically to be a warrior, Superman and other non-"warrior" Kryptonians don't have a Doomsday genome at all, but that Bertron's experiments were used to imbue Kryptonian soldiers with the beast's genetics as a fail-safe. That's all speculation, though. All we were really told specifically is that there is one, and it transforms Zod.

In the animated feature film Superman: Doomsday, it's Lex Luthor who discovers Doomsday's body in its capsule and when it reanmiates, he hopes to use it against Superman. It seems, then, that they're taking a pretty broad cross-section of Doomsday stories here.

We were unable to find any specific reference to longer-term contracts for General Zod and the other Kryptonians beyond Man of Steel, but it's standard practice for these things to be three-picture deals.

Is Michael Shannon in Batman V Superman: Dawn of Justice?