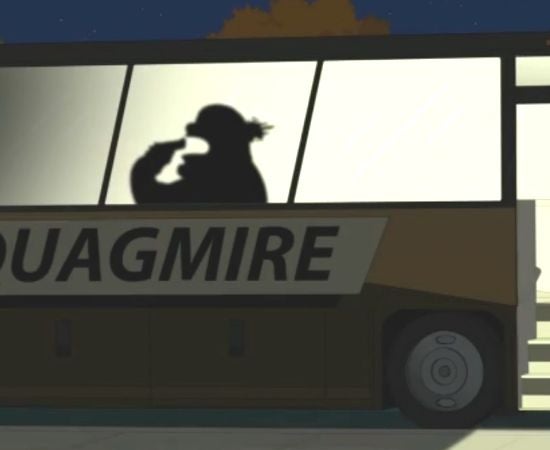 When Brian Griffin died on Family Guy two weeks ago, there was massive outrage on Twitter. The news media went crazy, petitions were launched, and conspiracy theories circulated. Last night, Peter Griffin shot himself in the head in an apparent suicide. The scene occurred at the very end of the episode. Peter entered his and Quagmire’s tour bus. There was the sound of gunfire, and a brief flash of light in the bus’ window showed Peter blowing his brains out.

Because the scene went by so fast, many viewers probably didn’t even notice it. For those that did notice, there seemed to be a general state of confusion on Twitter with some tweeting that Peter was dead and others arguing it didn't count because it was the punchline to a joke. In the minutes preceding Peter’s suicide, he had told Lois, “I am glad to be here, because everyone knows that life after being famous is even better than it was before. Let me just grab my stuff off the bus.”

The final scene of Peter shooting himself on the bus was the punchline to Peter facing life after stardom. As many longtime Family Guy viewers have noted, Peter has killed himself on the series before, and it’s never seemed to count as a real death.

However, with Peter Griffin’s suicide coming only two weeks after Brian Griffin’s death, it has left viewers puzzled. Does death only count for dogs on Family Guy? Could it be possible that Peter Griffin is dead as well?

There was no pre-arranged media interview talking about Peter’s death like there was with Brian’s death. Peter is also specifically mentioned in the synopsis for next week’s episode, so it would seem that the writers/producers didn’t plan on his death counting.

However, ever since the death of Brian Griffin, bookies have been taking bets on what Family Guy character will die next. Does Peter killing himself count? Will bookies have to pay out?

Family Guy: Is Peter Dead As Well Or Does Death Only Count For Dogs?