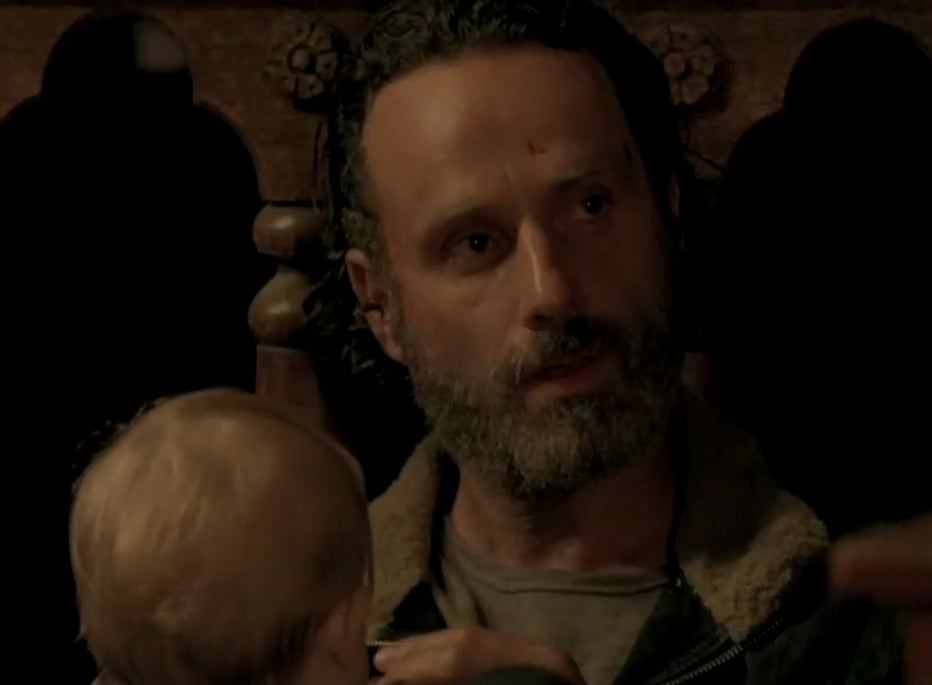 During a PR interview with AMC's website, The Walking Dead actor Andrew Lincoln, quizzed on his recent lack of facial hair, suggested the two previously-established options -- that his character has died, or found a razor -- but teased a third that's potentially as intriguing.

"I’ve seen a lot of fans recently [without my beard], so it’s one of three things: either I’m dead, I found a razor – or both – or we’re in an extended flash back. So, take your pick," Lincoln told AMC.

That's an interesting possibility that, because showrunners have claimed they're hewing closer than ever to the comics this year, we frankly hadn't thought too much about.

There isn't much in the way of unexplored story that happened from the comics, but there are elements -- say, Beth's story -- that are totally extraneous to the source material. It's impossible to guess what might happen there...but it wouldn't be in flashback.

That said, every season until this one featured time jumps, and it wasn't until the show's third season that Lincoln's character started to grow his truly impressive beard. There' plenty of time in those gaps that could be explored...to some end. It's not clear just why they would feel obliged to do that, but certainly there are worse ideas out there, and it might even give them an opportunity to have some favorite characters from the past guest star.

Of course, it's equally likely that it really is as simple as "Rick found a razor." A flashback sequence would make sense, but it would also likely mean they would have to fit him with prosthetic facial hair to get it long enough to match up with the impressive growth he's had for the last two seasons on the show, which seems impractical. Assuming Rick is not actually dead (which seems a safe assumption considering that he remains the lead character in the comic nearly 100 issues after the events currently taking place on the TV show), it seems likely he's found hardware and motivation to look a bit more civilized.

Could that mean that we're set for one of the "larger world" storylines that exposed Rick's group of survivors to other camps, other ways of life? Time will tell, but the general timeline syncs up with the comics...

Is The Walking Dead Heading For An "Extended" Flashback?