With the release of today's Savage Dragon #178, the war of the worlds that Dragon and Vanguard have been waiting for years to see has arrived in Chicago. And while Malcolm and Angel juggle new developments in their personal lives with stopping both run-of-the-mill superfreaks and the Tyrraneans, the dominoes are moved into place for the Li'l Wise Guys' next storyline and one supporting character won't make it to see who wins the war. 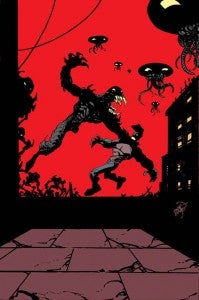 It's Here! Erik Larsen on SAVAGE DRAGON #178 (And, Yes, BEFORE WATCHMEN)