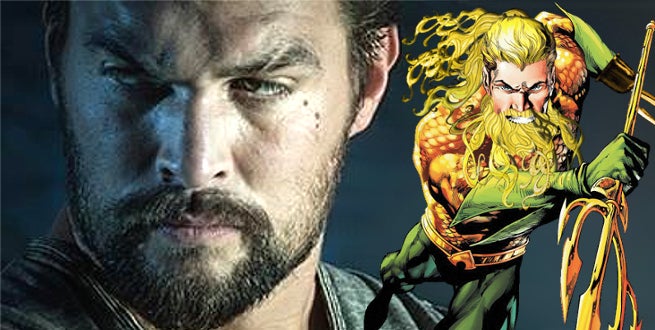 At the Sundance Film Festival, Jason Momoa was answering questions during the Smart Works panel. There were a couple questions about playing Aquaman in the DC Comics cinematic universe. You can listen to the audio by clicking here  (18 min & 24 min marks)

Momoa was asked, what can fans of the comic book expect from his version. "Well, things are going to be a little different, Momoa responded. "When I first went in I met with Zack (Snyder). His idea is pretty amazing. When I went in, he told me ... my jaw kind of dropped. My jaw doesn't normally drop. What he has planned for the DC world and for ... definitely for Aquaman is something that, you know... I think I was brought on for a certain reason and they got some really cool plans for him. I'm really excited for everyone to see it."

Momoa then tells how difficult it was to keep the casting news quiet. He had known he landed the role of Aquaman over a year ago. "Last year, when I was on this panel I was like eating chicken breasts and in training when I wasn't supposed to talk about anything," Momoa confessed. "I wasn't supposed to say anything until 2016. So I told a bunch of people that they could punch me in the face if I was on it, so I'm going to get hit a couple times. But they finally released it. I was supposed to keep it a secret for 3 years."

Then the host of the panel mentioned that Michael Shannon ("Man Of Steel") was spotted at Sundance wearing an Aquaman t-shirt. "That's awesome!" Momoa exclaimed. The host then follows that up with, "What's your relationship there?" Which seems to allude to our recent report regarding General Zod's involvement with Batman v Superman. Her question was followed by an awkward silence. Momoa completely dodges the question by changing the subject to a canned response about how important the role is because of his Polynesian roots and its connection to Hawaiian gods.

Later on, a 74-year-old woman proclaiming to be a huge fan of the Aquaman comic books wanted to know if Momoa's King Of The Seven Seas will have a beard and mustache. "Well, just going off what you've seen so far ma'am, I don't think he is going to be blonde or white," Momoa stated. "I can't really tell you because I haven't shot it yet. I hate to disappoint. But um, you know, I'm a little different than what those others. I hope you watch it with an open heart."