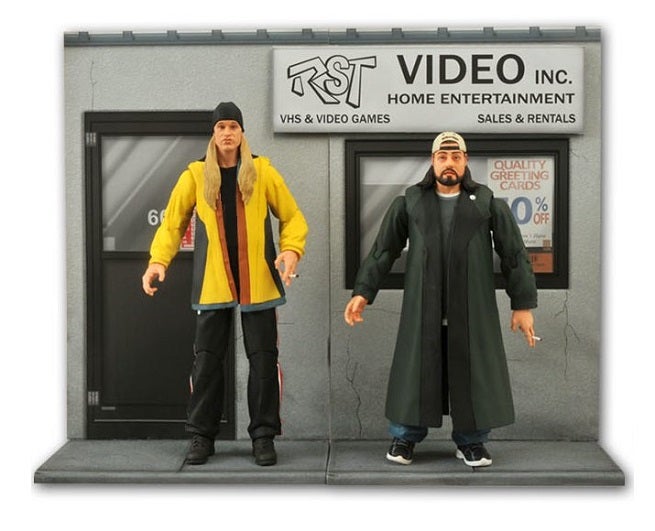 It's been more than twenty years since the first screen appearance of Jason Mewes and Kevin Smith's drug-dealing alter-egoes, Jay and Silent Bob. And this week, Diamond Comics Distributors gave fans a new way to celebrate for the holidays: With toys, of course!

This is hardly the first time Smith and Mewes have been immortalized in plastic (maybe the tenth...?), but this time it's timed to tie into the twentieth anniversary of Clerks back in October.

They've also got a bunch of accessories, including a backdrop that's the exterior of RST Video.

You can check out the image above and the official Diamond solicitation/ordering information below.

A Diamond Select Toys Release! It's been 20 years since we met Jay & Silent Bob in Clerks, and DST is celebrating the less-than-dynamic duo's anniversary with their most realistic action figures ever! Based on their appearances in Jay & Silent Bob Strikes Back, these 7-inch scale figures feature multiple points of articulation and the likenesses of Kevin Smith and Jason Mewes, and include interchangeable heads and hands, as well as connecting display bases depicting the interior and exterior of RST Video. Packaged in Select-style display packaging, with spine artwork. Sculpted by Patrick Piggott!