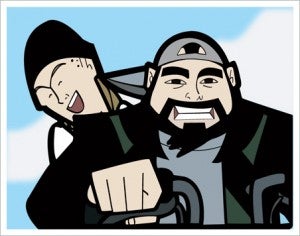 According to a recent "Ask Me Anything" Q&A that appeared on Reddit, filmmaker Kevin Smith plans to finish and release a new animated feature film, Jay & Silent Bob's Super Groovy Cartoon Movie, sometime in 2013. The film will likely debut on the speaking tours that keep Smith busy touring the country, much like his most recent film, Red State.

Responding to a question about whether he had considered working with the character--or the characters from his popular Clerks movies again--Smith answered, "There will be another Jay & Silent Bob flick next year: JAY & SILENT BOB'S SUPER GROOVY CARTOON MOVIE! As for CLERKS... Well, I'm working on something for Dante and Randal right now, in my spare time...".

Whether what he's working on for Clerks will be the rumored Broadway show or the reported second season of the show's long-cancelled animated series wasn't immediately clear.

Fans confused as to how a Jay & Silent Bob feature film ties into his previously-announced retirement from making movies were told by Smith, "I'm done directing film for the movie theaters, yes. Got one more to do then I wanna spend the rest of my life trying out some of the other arts as well." That likely means that--in addition to the stage and animation projects he's already announced in the pipeline and his TV series (Comic Book Men for AMC and Spoilers for Hulu), we'll see more of these limited-release, for-his-fans-only films on the horizon. It suits Smith's particular media persona, wherein he's crafted a cult of personality and an interest in recurring characters that may not be broad enough to make his films the box office sensations that studios want, but which has never lost him money on a film (yes, even Jersey Girl).