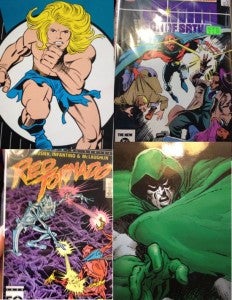 What does DC Comics have planned for the New 52 in 2013? Something rather interesting if Jeff Lemire's recent tweets have any meaning. Over the last three days, comic book writer/artist Jeff Lemire has tweeted a series of four images. Lemire's images have included Kamandi, Red Tornado, Jemm Son of Saturn, and the Spectre. It's always possible that Jeff Lemire just enjoys tweeting images or random DC Comics characters, but the final issue of Jeff Lemire's Sweet Tooth ships on Wednesday, January 9, 2013. The timing of these tweets being so close to the end of the Sweet Tooth series certainly hints that some space might be open on Lemire's schedule to take on another project. The mixture of characters is certainly very interesting and could possible suggest some type of new team book. It could also be that the characters will somehow figure into upcoming issues of Justice League Dark, which Lemire currently writes. How Kamandi would work in with Red Tornado, Jemm, and Spectre is something we would definitely like to see. Also, there's no reason to believe Jeff Lemire is done tweeting images, so if it is a new team book, it might not be complete yet.