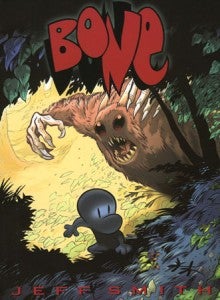 Beloved creative talent Jeff Smith is set to bring joy to kids of all ages with an announcement that he will be crafting new stories featuring his character Bone! In a press release, Scholastic Publishing, who will be responsible for printing the upcoming stories, announced some key details about the timeline and titles for a few of the upcoming stories. The first book, BONE: Tall Tales, will see a release in the summer of 2010 with Tom Sniegoski writing and Jeff Smith pulling duties as writer and artist. The next books, a trilogy that promises to broaden the BONE universe, will see release in the fall of 2010, and then the spring and summer of 2011. Titled BONE: Quest for the Spark, the books will see Smith drawing and Sniegoski at the helm for writing duties. This particular series of books will be the first to be set in the valley since the BONE prequel was published. "Jeff Smith has hinted over the years that there's more to discover in the world of BONE," said David Saylor, Vice President, Creative Director of Scholastic Trade Publishing and Editorial Director of Graphix, a Scholastic imprint. "So it's an incredibly exciting moment for Scholastic and for fans of BONE that we'll now be publishing books that extend and enrich Jeff's brilliantly original series." This will certainly be welcome news to the legions of BONE fans, who have bought enough copies of the series to drive the production of over four million copies of various BONE books over the years. It's certain to be an exciting time for Smith as well, as his creative energy will see many eyes upon him with this announcement!