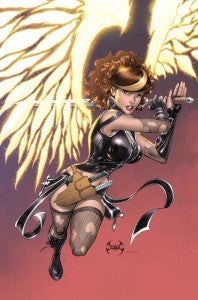 Rob Liefeld's Avengelyne is returning to comic book pages, and Joe Benitez will be doing a special variant cover for Avengelyne #1. Joe Benitez is known for his work on such titles as Lady Mechanika, Green Hornet, and GI Joe.

Avengelyne was created over fifteen years ago by Image Comics founder Rob Liefeld. The latest installment of the story of the fallen angel Avengelyne’s quest for redemption is being written by Mark Poulton with artwork by Owen Gieni.

Poulton and Gieni plan to take Avengelyne on an epic adventure through the sin-filled streets of New York City. Avengelyne will be going up against Torment, who is New York’s newest serial killer. Also, the mysterious Red Dragon has selected a new human host.

Avengelyne #1 is scheduled to be released in comic book stores on July, 20, 2011. In addition to the variant cover by Joe Benitez, there will also be covers of Avengelyne #1 by series creator Rob Liefeld and interior artist Owen Gieni.

Joe Benitez To Do Variant Cover For Avengelyne #1