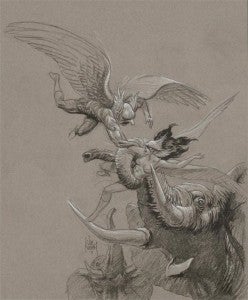 American comic book artist Joe Kubert passed away today at the age of 85. A legend in the comics industry, Joe Kubert was best known for his work on Sgt. Rock and Hawkman for DC Comics. He also founded The Kubert School, which offers an education in cartooning and the graphic arts.

All the details of his death have not been released, but information on twitter suggests he was in the hospital. Joe Kubert was born on September 18, 1926. He is survived by two sons, Andy Kubert and Adam Kubert, who are both successful comic book artists as well.

Joe Kubert had been currently providing art with his son Andy Kubert for Before Watchmen: Nite Owl. In July of 2012, DC Comics also announced a 6 issue anthology called Joe Kubert Presents. Of the new anthology, Kubert said, “I've been given the privilege to design the kind of comic book that I would enjoy reading and one in which I'd like to participate. This is it. I'll be doing Hawkman, Spit, The Redeemer, Sgt. Rock and The Biker in this 6-issue anthology. In addition, the book features the wonderful talents of Sam Glanzman and Brian Buniak. I had a blast doing it. I hope it blows you away.”

At 2012 Comic-Con, DC Comics Co-Publisher spoke about the upcoming Joe Kubert Presents story. Comicbook.com’s Russ Burlingame quoted Didio as saying, “There’s nothing else you can say about Joe Kubert; he’s a legend in the industry.”