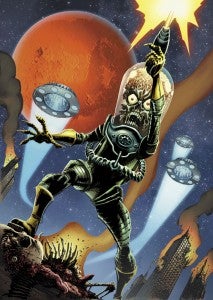 With the franchise celebrating its fiftieth anniversary, IDW Publishing announced not long ago that Mars Attacks would return to print as an ongoing comic in 2012. Tonight, they've got a creative team--and a pretty impressive one, at that--announced for the new series, which will launch in June: Writer John Layman, the creator and writer of Image's blockbuster hit Chew, will be joined by John McCrea, of 2000 AD and Hitman fame. (Fun fact: McCrea's first professional work in comics was an adaptation of the cartoon The Centurions, which was recently released on video for the first time.) Delighting fans of both creators, IDW's press relesae says that the series (which will take place in a new Mars Attacks continuity, despite the fact that IDW has acquired reprint rights from Topps and plans to release many of the old comics at some point) will "[bring] the brand's outrageous action and dark humor to a new set of tales." With only that description to work from, one could be describing Chew OR Hitman. "I'm a huge fan of Mars Attacks from a long way back. I own about half the original card set from 1962 and have a pretty big collection of collectables and doodads," Layman said in the release. "It's always been a dream of mine to destroy the Earth and inflict huge degrees of suffering on the rest of humanity. With this Mars Attacks series, I finally get my chance." Topps seemed pretty happy with the choices IDW made, as well. Ira Friedman, Topps vice president of global licensing, said of the pairing, "John McCrea was our first choice to illustrate Mars Attacks and we were thrilled that IDW was able to bring him aboard. His experience drawing over-the-top violence on comics like Hitman, Judge Dredd and The Boys, coupled with John Layman's penchant for twisted, offbeat humor makes them the perfect team to relaunch Mars Attacks." The release also revealed that the series--which will feature main covers by McCrea with variants by Sam Keith, Ben Templesmith, Eric Powell and others--will ship its first issue with no less than 55 variant covers, one for each of the original Mars Attacks cards from 1962. It did not describe the ratio of variants or how they will be distributed but did say that "A complete collector's set of the 55 covers in a box that replicates the original card packaging will be offered separately as well."