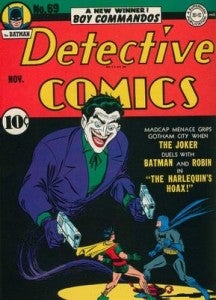 Comic book history, and pop culture as well, lost a noted icon today with the announced death of Jerry Robinson at the age of 89.  Robinson, who died in his sleep, was an icon of the Golden Age of comics, and his imprint and input went on to shape characters such as Alfred and Robin.  He is perhaps best known as the man who helped to shape one of the most recognizable and sinister villains in all of literature, The Joker. As a teenager, Robinson was hired on by Bob Kane to help with the new Batman comics in the role of inker for the series.  As time evolved, his role became bigger as well.

Moving from being a student at Columbia University to DC Comics turned out to be a huge decision for the young Robinson, as his work went on to shape and define those early images of DC Comics and Batman, but it is The Joker that he is most associated with.  While there has been controversy surrounding the origins of the white-faced laughing murderer, with Bob Kane, Bill Finger and Robinson all having varying stories on the subject, most do associate Robinson with the character's genesis.  The character, modeled after actor Conrad Veidt and a playing card, has gone on to become a symbol of horror, terror and mayhem, and audiences have seen him evolve and change over the years into what he is now, Batman's key nemesis.

Robinson went on to do pencilling duties for Batman, and in 2004 he was inducted into the Comic Book Hall of Fame.  Robinson continued to make appearances around the country at various comic book shows, always willing to chat with fans.  He also became a fierce advocate of creator's rights over their intellectual property, and the comic book landscape is richer for his having been a part of it.