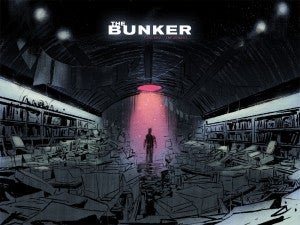 The story revolves around a group of friends who go digging in the woods, hoping to bury a time capsule that their future selves can find and enjoy. Instead, they find a message hidden in an underground bunker, sent back from their future selves. Featuring art by Joe Infurnari, the monthly(ish) series launched today and is available on the comic's official website as well as at comiXology.

Fialkov joined ComicBook.com for a brief conversation about the first issue.

ComicBook.com: I like the lampshade-hanging with Lost. Was that just a question of, "Well, people are going to say it anyway, so I might as well figure out a way to say it more cleverly"?

Joshua Hale Fialkov: Pretty much yeah. Obviously we're doing something pretty different than Lost, but, there's enough of that moment in there that it seemed... prudent to point it out. I had a friend comment that he's worried it'll end up dating the book, but, I actually think Lost is one of those shows that'll stand the test of time.

ComicBook.com: Did this begin as an ongoing story? It almost feels as if it could be a one-shot if not for a few decisions you made to withhold information from the readers.

JHF: Always an ongoing. Part of what I like about the story is that it's, pardon the complexity, but, infinitely finite. As the characters change, so does their fate. That's such a fun thing to play with.

ComicBook.com: On that note, I loved the last-page reveal. Was it intentional that you had all of these massive bombshells dropped on the characters and then ended on one that seems comparably small, but is actually the most game-changing?

JHF: Absolutely. I'm all about the cliffhangers. And ending on one that was emotional rather than physical, I think, makes the next chapter a neccessity for readers. Or, at least, we hope so.

ComicBook.com: There's something there to be said about character-driven versus plot-driven writing, isn't there? I mean, this is a story with enormous stakes but it feels more like it's about these guys.

JHF: I'm focused on character first, and, Joe, as a collaborator, has been terrific about keeping the characters grounded while also keeping an eye on the plot for me. Working with someone who's such a brilliant storyteller really does have it's benefits.

ComicBook.com: I'm still trying to wrap my head around exactly how and why the information about certain people was withheld or parceled out in certain ways. Do you have to have a chart somewhere: "This person knows X and Y about Billy, but this person thinks he knows Y and Z about Heidi and is wrong"?

JHF: Sort of. I know the journey of each of these characters and what each of them will do and accomplish. How the story grows and changes, though, that's just going to be a part of the fun.

ComicBook.com: The last time you and I talked, it was just before you launched I, Vampire for DC. You really do quite like breaking the world in your stories, don't you?

JHF: Well, there's a question of scale in comics... We have the freedom to tell these huge stories, but, at the same time, a responsibility to tell smaller, character driven stories as well. The past few years have been a time for me to really explore those possibilities, I think.

ComicBook.com: What if someone else had found this bunker with their names painted on it? Did future-them know a way to plant it that would avoid that pitfall?

JHF: That's an amazing question that I'm going to have to deal with soon.

ComicBook.com: How much planning ahead did you have to do? I feel like, depending on your approach, it could be fun to lay some of these ideas--about their future, about the world's future, whatever--out there without having necessarily an endpoint in mind as kind of a challenge to yourself. But in today's comics market, that might not be as practical as I think.

JHF: There's a long form version of the story where we get to take our time and really explore what everything means. It really comes down to fan response more than anything. We know we're not going to get rich doing a book this way, but, as long as we can justify doing the work, we'll keep going.

ComicBook.com: Was the earpiece/phone something you wanted to plant as physical evidence to dismiss right away the possibility that this is all an elaborate prank, or is there more to it than that?

JHF: Both. More to it very, very soon.