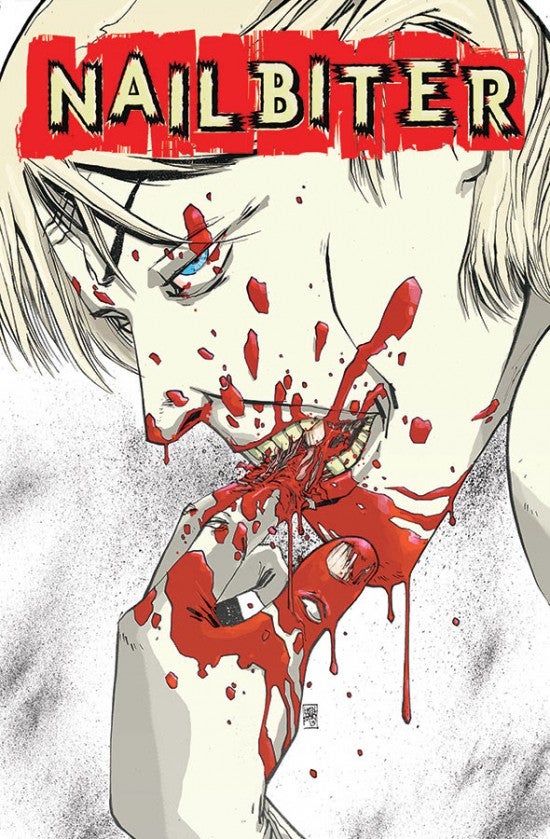 In the world of Image Comics's Nailbiter, there's a single, comically-named small town that's responsible for a decades-old spate of serial killers. They leave town, head out into the wider world, and kill lots of people in a number of bizarre and creative ways. Enter Nicholas Finch, a former Army Intelligence officer whose FBI profiler friend has gone missing while looking for connection between the "Buckaroo Butchers." A trip to the Pacific Northwest brings him -- and the readers -- face to face with the strange town and its slightly askew residents. And those are the ones who haven't killed anybody (as far as we know). Series writer Joshua Williamson joined ComicBook.com to talk about the series, due in stores next month. The final order cutoff for the first issue is today, so if you like what you see, reach out to your comics retailer and ask to have them order it. Like, now. ComicBook.com: Finch is a character who's in a very dark place when we first meet him. As the story progresses, how quickly will we get into what drives that? Joshua Williamson: Why Finch is in such a dark place is something teased early on and hinted but won't be fully dealt with until the next arc. For our first story arc we wanted to focus on the town and the initial mystery of "Why have 16 of the world's worst serial killers all come form this town?," and then build from there. Finch being in such a dark place effects how he sees the world around him. And Finch doesn't care about the big mystery. He just wants to find his friend who is missing and was last seen in Buckaroo, Oregon. The "Birth Place of Serial Killers." ComicBook.com: It's interesting that while Warren, The Nailbiter, is obviously guilty it seems you're setting him up not to be the central antagonist. Is that a fair assessment or have I just not seen enough yet to judge? Williamson: It's an ensemble cast. Warren, Finch, Sheriff Crane and Alice are pretty much the main players with a few others that will come along as we go. It's more about the town, y'know? Warren is still the star but it's about how he affects those around him. We're going to see a lot of him, but it just won't be always him. ComicBook.com: Certainly, though, his status quo from when you first see him at the start of #1 changes pretty quickly throughout the first couple of issues. Is he a character you can see yourself writing long-term? Williamson: Yes. There is a long term plan for Warren. He has an arc and is very much tied into the mystery. Who he is and WHY he is who he is… is a big thing to explore, y'know? How does someone become a brutal serial killer? We get to show that with Warren. And he is so much fun to write. ComicBook.com: This book is, cumulatively, a really cohesive work. The lettering jumps out at me as being something that really suits the book in that it's different than most of what's on the stands, but gels with the story being told. Williamson: That's all our letterer John J. Hill and our editor Rob Levin. We talked a lot about what we wanted to do, and knew we wanted it to stand out but still mesh well with the book. A lot of thought went into every piece. There are multiple versions of the first few pages. Different letters, colors, etc. But in the end I had faith in the team to put out the best product and they did. ComicBook.com: The art, too, is very expressive without being photorealistic enough to be really off-putting. Did you and Henderson develop this together, or did you bring it to him because he fit it so well? Williamson: Again, that was all Mike. The moment I brought this to Mike I had a few ideas for the overall look, but then Mike cut loose. Mike like to have his characters "acting" in his art, and so do I. The expressions do so much in the story. Horror was a big focus from the beginning. Mike and I have worked with each other a bunch the last two years and work well together. Mike just gets it. ComicBook.com: So...it's safe to assume that Alice is a character to keep an eye on, right? Readers who pay close attention will notice that there's something very odd about her in the first issue. Williamson: Alice came a bit late in the game. She was a minor character and even had a different name. But then one day I was laying in bed and thinking about the book and how it was missing a certain… piece. And then I just said to my self. "Her name is Alice. Alice in Horrorland." And then jumped out of bed and started writing down notes. Alice is going to play a major… MAJOR part in the series as the book goes on. ComicBook.com: And she wears a t-shirt that is your Twitter icon! Williamson: Ha. I'm not sure what came first. Her shirt or my icon. I think it's a chicken and the egg situation. I sent Mike a bunch of reference for her and he nailed it. 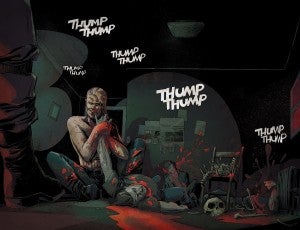 ComicBook.com: Sheriff Crane certainly seems to operate by her own unique rules in this title, too. Is it safe to say that the town's history has made her job somewhat different than it would be in most of the country? Williamson: Yup. Honestly, most of her job is to keep the town folk calm. Keep the peace. Crime is unusual in Buckaroo. It's really just that… as a cop you have to wonder… what am I doing wrong? Why are serial killers being created here? What happened? Sheriff Crane is young and a lot of the serial killers came from before her time, but it still bugs her. The killings don't happen in her town… yet. It's an odd case for a cop. To be on the lookout and think "Are any of these people going to grow up to become a serial killer?" ComicBook.com: I get a very David Lapham vibe from bits of this book. Is he an influence, or is that just my imagination and being drunk on all of the glorious new Stray Bullets material? Williamson: David Lapham's Stray Bullets has been a influence on my work for a bit. If you look at Ghosted or Masks and Mobsters, it's there. Not overt but in the back of my head. I don't think you can do crime comics without being influenced by Stray Bullets. It's so damn good. ComicBook.com: What's your elevator pitch for this book? How do you sell it to somebody who hasn't seen solicitation text ahead of FOC? Williamson: Since 1969, sixteen serial killers were born and grew up in Buckaroo, Oregon; and now an obsessed NSA agent wants to know why a small town is giving birth to some of the most vile human beings America has ever seen. It's a book about serial killers and a small town. If you liked True Detective...Nailbiter is the comic for you.

Joshua Williamson Talks Nailbiter: A Strange Journey Into The Birthplace of Serial Killers