Earlier tonight at 2013 San Diego Comic-Con, Avengers director Joss Whedon shocked fans by revealing that the Avengers sequel would be called Avengers: Age Of Ultron. Because Thanos had appeared in an after the credits scene in the first Avengers movie, many fans had taken it for granted that Thanos would be the primary villain in the Avengers sequel.

As shocking as Joss Whedon's revelation was, Avengers star Sa 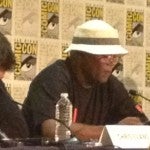 muel L Jackson delivered some even more shocking news to Comicbook.com in a press panel after the Marvel Studios presentation at Comic-Con. Samuel L. Jackson revealed that not only has Joss Whedon come up with a title for the Avengers sequel, but according to Jackson, "Joss has written it already."

Avengers: Age Of Ultron is scheduled to be released in movie theaters in the United States on May 1, 2015.