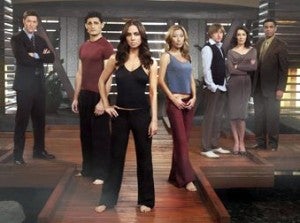 The Dollhouse may need an addition! Veteran actor Ray Wise (Reaper, Twin Peaks) will be joining the cast in what Entertainment Weekly is calling a "potentially recurring role" as Howard, an employee of the Dollhouse who works in the upper-levels of authority in the shadowy organization. Wise will be the latest addition to a burgeoning list of high-profile guest stars who will join Dollhouse in its second season, which premiers September 25th on Fox. Alexis Denisof (Buffy, Angel) and Jamie Bamber (Lee Adama on Battlestar Galactica) are notable guest stars, as well as the popular Summer Glau from Firefly. For the uninitiated, Dollhouse is the story of Echo, an operative played by Eliza Dushku, who is imprinted with skills, abilities and talents for various special "engagements" as the show calls them, only to have those abilities and memories wiped clean at the completion of the engagement. The organization itself is shrouded in mystery, but more and more of the layers are being revealed! Tune in to see what is pretend and what is real when season two kicks off next week!