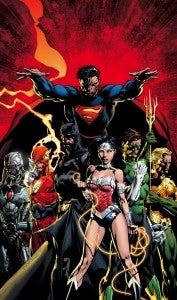 DC's impressive streak of selling out every issue of the first issues from their New 52 initiative continues into next week, as DC announced at their blog today that all 12 of this Wednesday's upcoming releases will go back to presses for a second printing after selling out through Diamond Comics Distributors prior to their street dates. Only 12 issues will be released this week because Justice League, released on August 31, is typically a third-week release and had a special advance-release date. Next month, it will return to its normal shipping schedule.

This so far means 39 of DC's 52 new #1s have sold out, almost exclusively before they even hit the stands.

At the same time, DC announced that Justice League #1, the highest-selling American superhero comic of 2011 according to Diamond, has sold out of its third print and is heading back to presses for a fourth print (cover shown at right).

Justice League #1 Gets Fourth Print, All of Next Week's DC Titles Sell Out