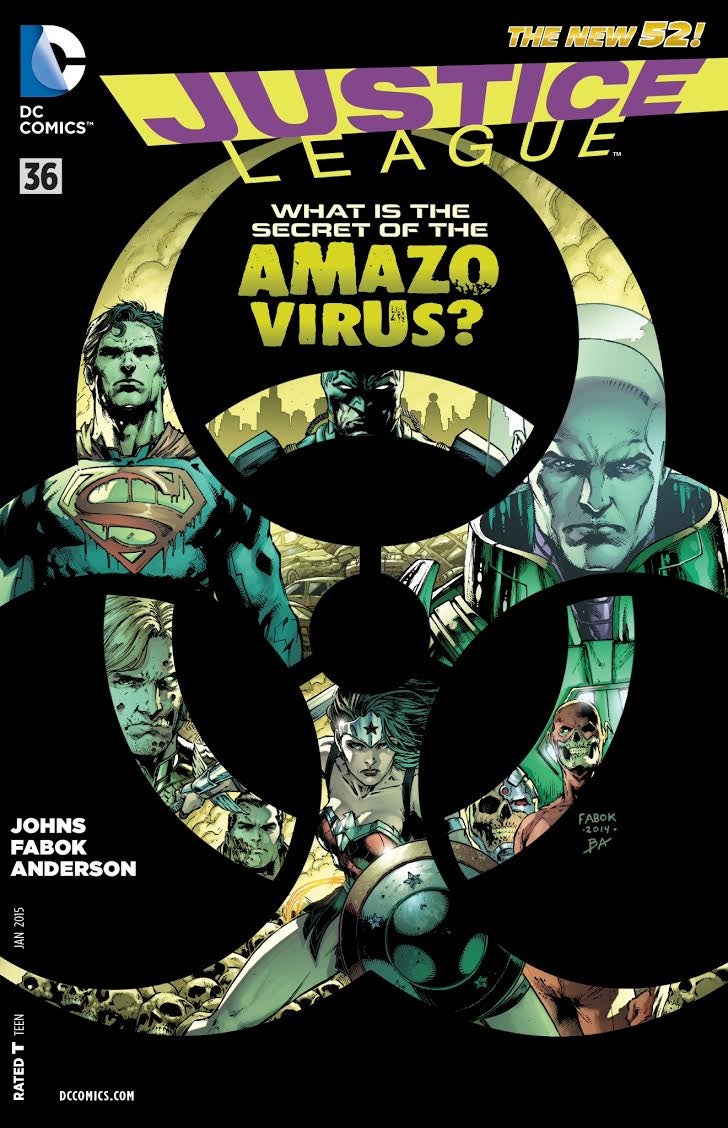 Justice League #36 begins a new storyline, "The Amazo Virus", one that isn't tied into events and doesn't crossover with other series. It's a story that's entirely contained within the pages of Justice League and already appears to be one of the better parts of the series three year run. A virus developed by Lex Luthor has been set loose in Metropolis, giving those it infects random superpowers before killing them in 24 hours. It is up to Lex and the few uninfected members of the League to find patient zero in order to create a cure before time runs out.

The plotting, antagonist, and objectives are all very direct. Geoff Johns is making no attempts to include twists or subvert his characters. Instead, he is embracing Justice League being a superhero book. The squabbling and disdain found in earlier storylines never read naturally or consistently, and have given way to present a story about superheroes actually acting heroically. Even with Luthor involved, the League is cooperating and helping one another to achieve their goals. The lack of mean spiritedness and gritty moments alone helps to make this one of the best issues of Justice League so far.

There's still a very similar aesthetic to what has come before in Jason Fabok's art. Justice League has been the defining comic of the style of the New 52. Jim Lee and David Finch are the dominant artists at the publisher and their line heavy, faux-realistic drawings are one of the most prominent elements of the past three years of DC Comics. Fabok's art emulates this style and adds a gritty edge to most of what occurs in the issue.

However, Fabok also brings a clearer sense of composition and cleaner artwork to the page. He may be comparable to Finch or Lee, but his work as a storyteller is superior to anything the other two have produced recently. Fabok has a good eye for action. The fight sequence in the middle of Justice League #36 keeps track of all five characters involved and maintains a consistent setting. Body language and facial expressions are also clearly presented. His characters never appear to be overly posed or photographic in nature. They appear naturally, or at least as naturally as a superpowered god, alien, or billionaire should. Fabok's depiction of Wonder Woman is particularly deserving of attention. She is gentle and feminine while still retaining a powerful appearance. It's a thin line (one defined by Cliff Chiang's work in Wonder Woman) and Fabok walks it well.

Brad Anderson's colors also help to refine the art of Justice League. He captures the essential character of the "Big Three". Superman and Wonder Woman are bright figures that still shine in the darkness, while Batman is defined by colors that pop just as much, but reflect much cooler hues. The city itself is draped in a decaying green smog. The threat of the Amazo virus is primarily invisible and Anderson's work serves as a constant reminder of its presence.

Justice League #36 isn't a return to form for the series, it's the creation of a much better format. It's a story that embraces the genre to which it belongs and discovers a natural sense of pacing with that change. Even though it's told with an aesthetic that I generally find displeasing, it is difficult to fault Fabok. He composes the action and figures very well in order to tell a fun superhero story. This is exactly what most people would expect from a comic about the Justice League and proves to be surprisingly refreshing.

Justice League #36 is a Heroic Highlight for the Series (Review)