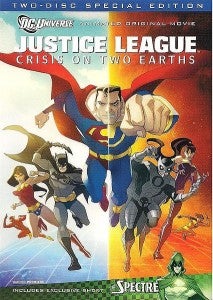 If you've been following the DC animated universe closely over the past several years, you've seen the range of projects span the various heroes, major and minor, in TV and more recently in made-for-DVD projects. The latest comes in the form of Justice League: Crisis on Two Earths. It's fitting that the focus on this film deals with travel between two different, yet parallel worlds, as this particular film project was intended to bridge the two worlds of Justice League the animated show and Justice League Unlimited, its successor. The reworked script for this film is fittingly used to reflect the world of the Justice League, who now sport a slightly different line-up from their TV predecessors, and the world of the Crime Syndicate, their parallel earth villain counterparts. The plot as to how these two worlds collide has moments of real magic to it, but the true success of the film lies in the, pardon the expression, blow-by-blow action. An all-star cast voices the animated feature, with the story based based on a couple of different story lines in the pages of Justice League comics from over the years. Our story begins with a bit of a wrenching battle between the Chris Noth-voiced Lex Luthor of Earth 2 and Jester (Joker) against members of the Crime Syndicate, the reverse of our world's JLA. It's made apparent right away that this ain't your kids' Justice League cartoon! As the story unfolds, Luthor is smartly portrayed, with touches of humor thrown in to lend a sort of dark humor to the plight of Earth 2's inhabitants as Luthor tells them to the JLA of Earth Prime, who he has come to for help. It doesn't take long for us to see the power of villains such as Power Ring, Ultraman, and Superwoman, as the heroes storm Earth 2 under Luthor's directive. What follows are clever and well-illustrated action sequences, pitting the JLA against the Syndicate and some surprise characters, such as Vixen slugging it out with Wonder Woman! In fact, the action sequences are so well-done that in the early stages of the film, the main plot almost takes a back seat to the slugging and flying fists. We're soon brought back into the frame however, as we learn that the Crime Syndicate has a tight grip on the citizens of their world, the only block keeping them from total control being nuclear weapons. The film begins to reach a bit too much after a pivotal battle between Ultraman and Luthor. The President of the United States for this world steps in, and a "speech-off" between him and the JLA ensues, lending the story the feel of a morality play and the characters in danger of becoming canvas-filling symbols. A sub-plot between the president's daughter and Martian Manhunter feels wasted, but the movie reigns it back in at just the right time with a sinister, intriguing exploration of Owlman's views on the universe, which sets the tone for the concluding parts of the film. James Woods' Owlman is perfectly characterized, as is his Earth Prime counterpart, the William Baldwin-voiced Batman. I'll never get used to not hearing Kevin Conroy when Batman's in animated form, but Baldwin does a nice job. There are some very cool scenes as the movie continues, mostly due to more characters showing up that we didn't expect to see. The final battle inevitably ensues, as a race to stop Owlman's destructive plot unfolds and is resolved in a very interesting twist involving Batman. It seems fitting that Batman has such an integral part in the finale of the film, as he proves time and again in this film that his brains can often defeat brawn. The scenes of the battle are everything we hoped they would be. Fluid action, the matchups we've waited for, Wonder Woman vs. Superwoman, Flash vs. Johnny Quick, Superman vs. Ultraman, and the true evolution of the DCAU is seen here in all its glory. The action helps carry the movie to its fitting and surprising ending. There are only a couple of weak spots in the story as a whole, one distracting piece being Mark Harmon's wooden, often stilted delivery as Superman. The man of steel sounds a bit awkward, but thankfully the focus is shared amongst enough of the heroes to balance it out. Green Lantern rarely speaks, but his power ring creations show the early creativity of the hero at work, but hearing him have a more active role would have been nice. Some fans of the Justice League series may feel that they have seen parts of this before, especially in the Justice Lords episodes, but that would be selling the film short as a whole. What's delivered here is an effective piece of animation that rightfully lets the viewer be impressed by the action of the piece, rather than getting pulled into some of the plot points that drag and pull focus just a bit. A not to miss film, no matter which universe you're from!