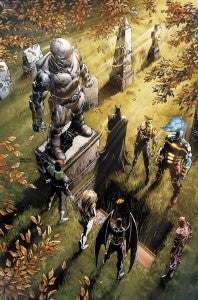 #12 is not only the final issue of the series by writer Dan Jurgens and artist Aaron Lopresti, but the final issue of the series altogether, with nothing remaining but an oversized annual, shipping the last week of this month and put together by a guest creative team including co-writers Geoff Johns and Dan DiDio. As such, our monthly commentary track with Jurgens will come to a close--the second such ending we've had in the last year or so, following the conclusion of the Booster Gold series that he wrote and drew for most of its run. It's a calm, quiet issue compared to most of the series, which has been pretty wall-to-wall action since the second or third issue; with so many characters who need screen time and, in the second arc a team of villains as well, it's seemed as though Jurgens and Lopresti never really got a break to catch their breath and focus on the more character-driven moments that were a staple of many of Jurgens' best issues on Booster Gold and even Superman. We talked to the writer about the series, what worked and what didn't, and what he'd have liked to get to. We talked a little bit last issue about Lightweaver's brother and how he might turn up as a problem here--and yet, it's still a little jarring when it happens literally on the first page! Yeah, I wanted to get us into the action right away so we decided to launch the story with Malik. Good to see Batman back, though; was it important to get him back on the page for Rocket Red's sendoff? I thought so. Not just Rocket Red's sendoff, but the team as a whole. He was there at the start and had to be there at the end. "Our adventure together proved otherwise." We get a little on-page indication by Batman of a little bit of the nature of his past with Booster. Was there a particular story you had in mind, or was it just a New 52 riff on the adventure they had together during Booster Gold vol. 2? No, there was a particular story we had in mind that was actually going to be our issue zero. Sadly, we didn't get there. 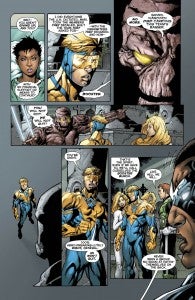 Was it an intentional juxtaposition to cut to August General In Iron immediately after someone complains about dehumanizing Gavril by building a tomb that has the helmet on? Yes. Despite his appearance, the August General is human and understands that. He also understands war and its nature, thanks to his military background. Given the sudden additions of OMAC and Batwing and the Firestorm story, it seems as though Booster's speech--"I took the members they detailed, built the team they asked for, but--" could be a little bit of you making a commentary on the state of the book through Booster, much like you did in the first issue. Is that fair? Oh, I'd have to say that Booster's dialogue reflects his experience in forming the team. Remember, the UN was coordinating the team's membership. One minor continuity quibble: When Batman first talks, he's saying, "You're related to Lightweaver?" Then in the flashback combat sequence, we see him create a GIANT FREAKING LIGHTWEAVER MADE OF LIGHTWEAVER POWERS. Was that just taking a little of creative license because in the beginning of the issue you needed that expository dialogue? Not sure we have a problem there. Just because the guy had the same power as Lightweaver, that doesn't mean he's related to him. Guy just can't help himself, huh? Just when Malik is starting to act sane, and August General is talking to him like a human being, Guy charges into the conversation on a rant. I'd say rant is a bit strong. Malik had just attacked him, for crying out loud. At a funeral, no less! So you really kind of set the whole series up as an arc for Booster, in a way. After everything, his role as leader is codified by Batman, something that the other members can respect more than the seemingly-arbitrary way he was appointed by the UN. I didn't intend for it to work that way, though we had decided from the start that Booster would be the leader. But, when it was decided that #12 would be the last issue, it seemed a natural way to pull things together and bring it full circle. Is it safe to assume that we'll get a relaunch of this title, in some form or another, and that's why we're getting a new headquarters? That's all open to speculation and conjecture, which is part of the fun of being a fan! 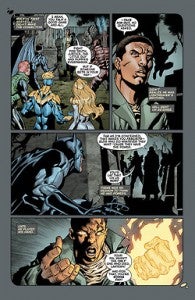 It almost seems like a weird kind of mirror of the end of Generation Lost, for Aaron to have to set up the end/beginning again. I hadn't quite thought of that, but you're right. I was just trying to do something fitting. The cancellation was something of a last minute decision so we didn't have a lot of room or time to do things differently. The "financial arrangements" Batman alludes to--is it safe to assume Bruce is bankrolling the team? Unless Batman has tapped into someone else's bank account, that's a safe assumption. That's a bit interesting, since Ollie Queen was not only a booster (no pun intended) of the JLI in previous issues of the series, but also paid for the Justice League in previous iterations. Any particular reason why Bruce is a better choice? I would say that is more of Bruce's trajectory these days. Just telling Malik to "beat it" seems odd, and like a missed opportunity. Is it safe toa ssume that he might have joined the team, had the book continued? I'll just say we had plans to use Malik further and leave it at that. Was that just a matter of the guys working on the annual didn't have the time, page count or interest to support the character? They have something else in mind and didn't want to deal with Malik, which is understandable. With that in mind, we decided to conclude his involvement and get him off stage. So--at the end of the day, it looks like you've almost re-established a classic JLI status quo: Batman is gone, but on-call. In an emergency, yes. You do realize that in a single panel, you've almost certainly let loose upon the Internet a torrent of "Green and Gold" fan fiction, right? Ha! I wondered if anyone would catch that! Was the Booster-Godiva relationship always in the cards, or is that something that developed over time? It was in the cards the whole time, though in a different way than we ended up going. 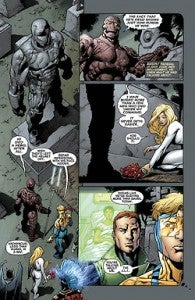 That asked, if "all that matters is the here and now," what's that mean for certain parts of his mythology that was, ahem, predetermined? Not sure what you mean by that. I'd say that it was more a "We've turned the page," comment. This'll be the first time in a few years now that you haven't been writing Booster Gold on a monthly basis.Obviously you've been around comics long enough to know that everything is impermanent, but this is a character you created, very early in your career, and you've shepherded a great many of his adventures since. Is it always a little harder to say good-bye to a character like that? Of course, it is. Not just because I created Booster, but because I thoroughly enjoy writing the character. I think he still has a great deal of worth and potential and would always enjoy the chance to mine that territory. Certainly with a TV series in the offing, it would be nice to see Booster get his own ongoing again. You think there's any chance of it? It's comics. There's always a chance! You said earlier that the cancellation was sudden. With George Perez's comments out there in the ether, it does seem to be that DC is being run from the top-down, with not a lot of necessary information trickling down until it's too late. Do you think that's a fair assessment? Each situation-- or book and character-- is different and can get handled a different way. It's pretty hard to draw comparisons. With a sudden cancellation under your belt, though, one of the typical end-of-run questions becomes somewhat more urgent: Is there anything (besides maybe that Booster-Batman story) that you really wish you'd had the time to do? Sure. I think every writer has stories they'd like to explore further. I think we had some good stuff planned. I've felt that way about almost every project I've ever left. What was the deal with putting half the team in a coma at the midpoint? Was there a longer game that you just didn't get to pursue, or was it as simple as making some elbow room for OMAC and Batwing? From the start, long before Justice League International #1 shipped, I stated quite clearly that the roster would always be in flux. Yes, to a certain extent, we wanted to accommodate OMAC and Batwing. But, to a larger degree, the plan was always to rotate characters through the book. Look, we wanted to make it a fun book that would have some surprises in it. Mixing the line-up is one of the ways to achieve that. Aaron Lopresti, who did incredible work on the book, and I had a great time doing so. All you had to do is look at his OMAC to know he was having a great time while drawing him. 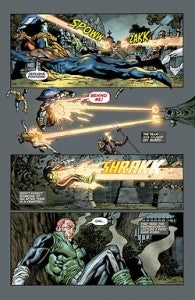 Besides Skeets, were there any other characters you regret not being able to get into the pages of Justice League International? No, Skeets is the main one. We were going to have some fun with that! With so many new villains, it felt a bit like you didn't have the room to flex your muscles in terms of guest stars that previous iterations of the JLI have, or even your JLA back in the '90s. Do you think it served what you were doing to focus on the core group? Not at all. This book existed in a vastly different environment than it did when I previously worked on JLA. Back then, I was starting in a known universe with issue 60 (I think!). This was a new universe with a first issue. That makes for a very different set of criteria. All of that "turning the page" stuff in this issue--was that a bit of metatext? If Booster is moving on to the next stage in his evolution, is it time for fans to do the same and let go of our hopes and conspiracy theories that he might be a tether to the DC Universe of old? My feeling has always been, that, regardless of the character, if there's something about him/her that fans want to hold onto, they should do so. If so, can you tell us who Rip's mother was? Sorry, but I am SO sworn to secrecy on that one...

Justice League International #12: The End of the Road