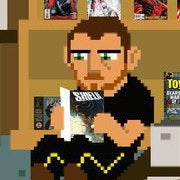 With the ever growing social networking scene, it's never been a better time to be an independent comic creator. Opportunities present themselves every day and networking has never been easier. It's also easier to discover new talent and projects as a comic enthusiast. Up and coming creator Justin Wood took the time to sit down and talk some shop and discuss his work with new indie publisher Pross Comics. Let's start off with a little background. What is your earliest memory of anything to do with the comic industry? I've got a terrible memory when it comes to thinking about the past, so I have no idea how old I was, but there was this little Dollar Store off of the end of a strip mall, just one of those crowded dinky joints where low income people buy oven mitts and the like. And when we'd go and my mom would buy me these little plastic bagged comics, where they'd take three random issues from the mid-nineties and slap 'em together for a dollar. Marvel, DC, even a lot of Valiant comics. And they were never sequential, so I never finished a comic story. I just tried to piece together what all these wacky people wearing shiny spandex were doing. What were some of your favorites? Always loved X-books. X-Force, X-Man, very rarely had any X-Men or Uncanny in there, but if it was mutant it was good. Also treasured the library's copy of Art Adam's "Monkeyman and O' Brian." That may be the greatest comic influence to me as a kid. When did you decide you wanted to work in comics? I'd always loved drawing stuff, and when I was real little, I wanted to do concept art for Star Wars. Years later, after a major bout with depression, I decided all those fears of art being too dangerous a job option was far less dangerous than the absolute apathy I had for everything else; so I decided to make a professional run at it. That was about four years ago, maybe three. How did you get your first job in the field? I don't even know if I've gotten my first job. It's so tough when you're a freelancer, because it feels less like 'jobs' and more like people sometimes giving you money for work. The only real professional arrangement I've had so far is with John Pross who's always been good about paying me. I met him though Brandon Bullock. You are now a regular for Pross Comics and you did some work on his jam book, Danger: High Voltage. What was that experience like? Pretty good. I initially came on to do colors for his now cancelled series Heroless, but I usually jump to do something that will be published physically and quick to contribute. I wrote a three page thing for 'Voltage' and then Bullock asked if I'd draw his three part section as well. That was with us at NYCC, and I think it turned out pretty well. In Pross' Posers #1, we are introduced to the character of Slugger. You wrote the one-shot Works Hell With Others featuring the character. What brought that gig on and how did you approach it? I forget exactly how it happened, but John liked my writing for Voltage, so he started sending me his Posers scripts to critique. I instantly liked Slugger as a character from the first time I saw Zumel's concept art. Just this badass punk chick who apparently had a feminazi hatred of men; instantly attractive as a character. So I wrote a one-shot draft which was about her joining a team and committing horrible acts of violence in between bouts of sailor speak. We cannibalized that script for ideas before he asked me to do something else with her, which resulted in three or four half scripts before I settled on Works Hell. Where does the one shot fit in in terms of timeline with the rest of Pross' line? Works Hell is set somewhere before Posers, I'd say a couple of months or so, because Lady Adventure got written into John's book. She joins Power Co. which she wasn't a member of in Works Hell. At this point, has Lady Adventure seen more action than in the Slugger one shot or is she still a little green? Not much more. Why she's shacked up with Power Co. is beyond me, but she's strong enough that she can deal. Pretty much that's where her idealistic naiveté comes from, being so strong she doesn't have to worry about danger. [caption id="attachment_34927" align="alignright" width="192"] 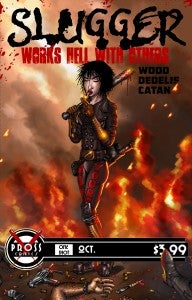 Slugger: Works Hell With Others Pencils by Justin Wood[/caption] Will she show up in the planned Slugger ongoing? Oh yes. I like their relationship too much. They're great counter balances to each other. Slugger's there to keep her out of trouble and Adventure is there for when Slugger is at her darkest. It seems like Lady Adventure will be in for a rude awakening if she starts palling around with Slugger on the job. Not so much. She's got no illusions about what Katrina does in the dark of night, but she might run into trouble backing up the soulless dicks of Power Co. Then again who knows, maybe she'll surprise us? I would imagine she doesn't like what she sees behind the curtain of Power Co. Not sure, you'll have to ask John. I'm sure he's got some big plans. Have you been working on anything else besides the Slugger stuff? I'm currently penciling the six - eight page teaser of John Nugent's Stellar, an adaptation of his e-novel, so we can submit it to companies. Been doing promo art for a band called Medleydeth: horror core stuff. It's fun work. Do you prefer doing art or writing? Can't really say. Writing is scarier but more rewarding. Drawing is more challenging but when it goes right it keeps you warm at night. Have you been reading anything currently? Brian K. Vaughn's Saga. I picked it up the other day. $9.99 for the paperback and it's so damn good. "Flex Mentallo: Man of Muscle Mystery" I bought on my birthday and it can save someone's life. Also reading Scott Snyder's "Batman" run and Jason Aaron's fun-as-hell "Wolverine and the X-Men". If you could work on any character for each of the big two, who do you think they'd be? For Marvel, and this might change, but Abigail Brand. Not very often someone creates something new for the Marvel universe that isn't ignored or disposed of for the same-old, but she's just plain badass. Tougher for DC since I don't read them as much. Also weirdly more intimidating, instead of writing people you write gods...maybe that Red Lantern cat? Are there any other independent creators we should be checking out? Oh so many. Of course, everyone at Pross Comics. They're all so talented. Derek Adams and Brandon Bullock are teaming up for something that will probably be a blast. Sam Spina is one of my all time favorite undiscovered indie guys. His minis "Fight" and "Fresh to Death" are drunk funky poetry. Who would you cast in a Slugger film? I actually racked my brain about this the other day. John created her with Katrina Law in mind. The best I could figure was putting Eliza Dushku's personality in Rhona Mitra. Do you see yourself in this industry for the long haul? Well I'm actually planning to get into animation as a day job, not sure I've got the talent or the severity to take on the industry kings right now and make a living. But yeah, while I'm plugging 9 to 5 in the cartoons I hope to keep writing and drawing those boys in capes.