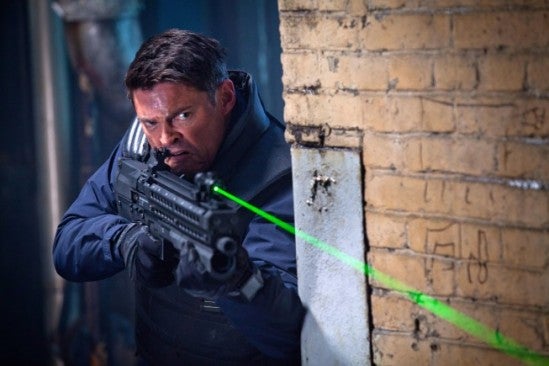 Yesterday, NBC ruffled a lot of feathers on the Internet by announcing that Parks & Recreation will be on hiatus for most of the rest of 2013 to accommodate the network's business goals and promote some of their new series.

Getting a bit less negative press was an announcement that Almost Human--Fox's new sci-fi drama starring Star Trek and Dredd's Karl Urban--will be delayed by two weeks for similar reasons: the network wants to take advantage of a massive NFL lead-in.

According to Deadline, Fox "is making the change to take advantage of the football doubleheader lead-in on Sunday, November 17 and try to keep the momentum going with the second episode of Almost Human airing the next night in its regular Monday 8 PM time period."

They add, in terms of overall network synergy, that "The decision also will help breakout Sleepy Hollow, keeping its successful pairing with Bones for a couple more weeks before Bones relocates to Fridays on November 15. That same night, Raising Hope will have its fourth season premiere with one hour of all-new back-to-back episodes."

Urban's decision to step into the lead role of a small-screen J.J. Abrams production after having headlined a handful of major motion pictures in recent years has put a lot of eyes on Almost Human. If it's a hit, it could raise Urban's overall profile and help make him the massive star that many think he ought to be, whereas if it's a failure it could be blamed on Urban (especially after the financial disaster of Dredd, in spite of a rabid fan base and glowing reviews).