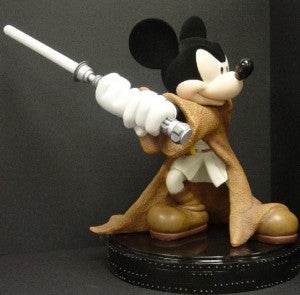 Filmmaker Kevin Smith, whose catalog of work has consistently referenced and revered Star Wars since his first feature film, Clerks, featured a discussion about independent contractors on the Death Star, chimed in via his Facebook page about the acquisition of Lucasfilm by Disney and the announcement that the company would release at least three more Star Wars films, beginning with Star Wars Episode VII in 2015. You can check out his remarks below.

WE ARE DISNEY! ALL YOUR CHILDHOOD ARE BELONG TO US! Lots of folks asking what I think about the recent announcement that Disney is now the proud owned of the STAR WARS universe. I'm all for it. Can't wait to see all the new movies they're gonna make. The 7 year old Kev who saw STAR WARS during its initial release in 1977 is finally gonna get all 9 STAR WARS movies he was promised back then. I'll be first in line to pay for whatever they do. The Disney purchase of Lucasfilm is the fulfillment of a wish the Mouse made upon a star a few years back: the wish for little boys. Sounds dirty but it's just business: the Disney Princess market gave the Mouse all the little girls they could sell an Ariel costume to but Disney couldn't interest boys in their wonderful world beyond the single digit years. Few boys are clamoring to play with a Peter Pan action figure and hooking the audience while their young is an important component of long term brand loyalty. So rather than develop their own boys brand in-house, they started buying "boy" stuff. It started with Marvel and it now continues with the world of STAR WARS. And so long as Disney's allowed to continue the franchise and make new flicks, they'll make that $4 billion back in less than a decade. They've got eons worth on non-movie material to work from, too: all the books, the games, the comics, etc. But the most important development to come out of the Disney purchase of Lucasfilm? We might finally get an official Special Edition BluRay release of the STAR WARS HOLIDAY SPECIAL!!!

Unfortunately for Kevin Smith, Disney suggested on their conference call with investors this afternoon that there may be distribution issues tied to the old films--and if the acquisition of Lucasfilm doesn't include distribution rights and Fox still retains those, the chances are slim (at best) that there will ever be an official release for the Holiday Special.