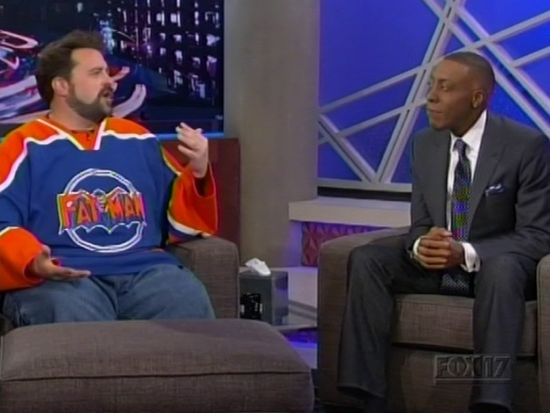 On Wednesday night’s Arsenio Hall Show, director and fanboy Kevin Smith was a guest. Smith talked about the latest movie he just completed filming, which is called Tusk.

Smith explained that the movie grew out an ad that he read online. Smith said, “This guy was offering a room to rent in his mansion in Brighton, England. He’s like, 'I’m an old man, who’s lived a very storied life, including one time when I was lost at sea with only a walrus to keep me company for six months, who I nicknamed Gregory, and he was the best company I ever had. And now I find myself in this massive mansion, lots of rooms. I’m offering you a room to rent, free of charge. All I ask is that you in turn, once a day dress up in this walrus costume that I’ve been building.'”

Smith wound up getting financing for the film, and he shot it in only twenty days. "We have a release date. It's coming out in the third quarter of 2014," said Smith.