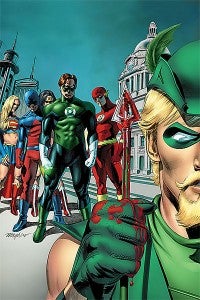 The dust has more or less settled, literally and figuratively, on the residents of Star City and the members of the Justice League, as the events in Justice League: Cry for Justice #7 and Justice League: Rise and Fall are now out in the open. Perhaps one of the more shocking Justice League stories ever conceived, Cry for Justice had a swath of violence and loss cut through the DC hero community, courtesy of the villain Prometheus, a man capable of anticipating the powers and skills of his adversaries. Prometheus' plan to destroy several prominent cities in the DC universe hits many of the heroes hard, as the targets are their home cities. In a desperate choice, the League lets Prometheus go in exchange for information on the devices set to destroy the cities, but not before Star City, the home of Green Arrow, falls. And that's when Green Arrow takes matters into his own hands. SPOILER ALERT! Not only did Star City fall in issue seven, but so did Green Arrow's granddaughter. Beyond the breaking point, the archer hunts down Prometheus and puts an arrow through his head. Justice League: Rise and Fall picks up from that pivotal moment, which could redefine the character of Green Arrow forever. Since his famous revamp in the late 1960's, early 1970's at the hands of Neal Adams and Denny O'Neil, Oliver Queen has wanted real justice and a shift in the way the world works so that wrongs are swiftly righted, but the actions he takes in Rise and Fall are something new altogether. Are we seeing in Green Arrow's actions the devolution of a hero and heroic ideals, or rather a new division of superhero providing answers to a question that DC seems to have been posing more intently for some time. Should heroes kill? Ever? We've seen plenty of villains die over the years, but it was usually done as an indirect result of something they themselves did or an accident that the hero may or may not have had a hand in. What we're seeing with Green Arrow is the deliberate killing of a villain to prevent future terror and destruction coming from a place of vengeance. Think back not so very long ago to the actions of Wonder Woman, who in issue #219 of her series snapped the neck of Maxwell Lord, who told her plainly that the only way to stop him from mind controlling Superman was death. No lie, no pretense, the magic lasso making Lord speak the truth. The Amazon didn't hesitate. She did what she felt had to be done in order to stop a rampage by one of Earth's most powerful figures who was helpless at the hands of Lord. There was little doubt in the mind of Green Arrow as well, as he swiftly went to Prometheus' hideout and fired the fatal arrow. While Wonder Woman faced criticism, scorn and those calling for a tribunal in front of the world, the fallout from Ollie's actions has yet to be seen. Is there any difference between these two deaths? Both men were willing to continue heinous actions, no matter the obstacles in their way. Both were determined to kill, although perhaps Lord's scale was just beginning when compared to Prometheus'. So why does Wonder Woman's killing of Lord strike me as more justified than Green Arrow's work? I think what does it for me is the vengeance aspect and the fact that this was done by a hero, someone we admire and look toward as a model, who was supposed to be where the buck stopped for appropriate behavior. Wonder Woman's actions were in the heat of battle, in the throes of a mind game for the soul of Superman, one of the most super-powered beings whose unchecked rage would have leveled the planet. Perhaps Prometheus would have done the same, but now we'll never be sure. This same dilemma of when and if a villain should be put down due to the threat he poses arose five years back in the pages of Batman, when a very disgruntled Jason Todd astonishingly reappeared in Gotham City. Long thought dead at the hands of the Joker, the former Robin returned, under the guise of The Red Hood, and waged a war on Gotham's criminals before being confronted by his former partner, of whom he wanted to ask only one pivotal question, one found in the pages of Batman #650, why is the Joker still alive? Batman responds that he wishes Joker were dead, but that killing him would be too easy, and he may not recover from offing the evil clown. Even though that means keeping this monster on the Earth, Batman can't carry out something he has thought about endlessly. It's that sort of thinking that separates our heroes from our villains. So where does that leave us with Green Arrow? Of the pantheon of DC characters, it's not that surprising that Green Arrow is the one to go down this road, but it is a dangerous one. Comic books have every right to challenge us with morally complex questions while also entertaining, and certainly Rise and Fall does just that. While the actions of Green Arrow will undoubtedly provide great story material, the ramifications have to be considered. Is this a resetting of the bar to a lower standard of behavior, one where vengeance and pain drive some characters, or is this showing us, by a stark contrast, the true nature of heroism? If we look at Batman's response as a standard, Green Arrow is in danger of falling far below it, and not for the betterment of the stature of our fictional heroes.

Killing not so Softly: Did Green Arrow do the Right Thing?