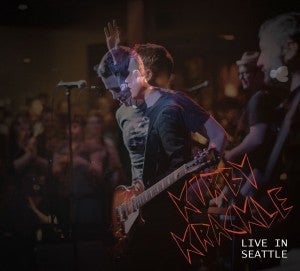 In just a couple of days, the Kirby Krackle--that's Kyle Stevens and Jim Demonakos--will play San Diego's Comic-Con International for the fourth year in a row.

The pair, who have perfected a style of geek rock that focuses heavily on comics and video games for the foundation of their lyrics while building on influences from '80s pop through contemporary college rock for a fun, light sound that's eminently listenable, have a new record out first, so that all of us headed to Comic-Con can plunk down our $10 on iTunes tomorrow and have something to listen to on the plane ride there.

Live in Seattle is more than that, though; featuring guest performances and the band's first recorded cover of a known hit, it's calling out for attention from the mainstream music marketplace in a way that the previous live album--a six-track, acoustic EP recorded in Australia--really never did. It's also a nice selection of tracks from the duo's first three albums, and whereas the Acoustic in Australia EP was really just an interesting, alternate take on some of their fan-favorite tunes, this time around it feels like the songs have been imbued with a vitality that only live music can really provide, and it gives those who haven't heard them live yet (or who, like me, only heard a brief, acoustic, one-man set at New York Comic Con) a feel for what the pair can do onstage.

The band, for me, graduated from a cool novelty into real musical performers last year, when their album Super-Powered Love hit stores on the same day as They Might Be Giants released Join Us and Tim Robbins released his debut album. I listened to the three for my podcast and, frankly, didn't fall immediately head-over-heels for Super-Powered Love. Months later, I still think it's the weakest of their three studio records, but it's found its way into my playlist more than I would have expected. That's the kind of dynamic that I've had with Springsteen and Arcade Fire albums--music that needs to be absorbed rather than just consumed--and that was a huge step forward for a band whose music will likely always be pigeonholed by most reviewers and even listeners just by virtue of the subject matter.

There's little to complain about on the eleven-track playlist except, of course, that it's eleven tracks and therefore not as long as most would expect from a live album. (Again, as a Springsteen fan, I own a handful of live records that push three hours.) Still, it does a good job of showcasing some of their best work ("Great Lakes Avengers," "Ring Capacity") while bringing some of the music that didn't work for me on Super-Powered Love in a whole new light. Adam WarRock's appearances on "Booty Do Math" and "Roll Over" lend a visceral energy to the tracks, too, even if I still just can't get behind (no pun intended) the former. "Take On Me" is a surprisingly loyal cover of the '80s classic, one that comes a little bit out of nowhere and works for the album because it's in the same musical ballpark as the Kirby Krackle's stuff. It's a welcome addition, and the kind of unexpected treat that live albums often bring.

The record's not perfect, but it's a near-perfect distillation of what The Kirby Krackle is about, musically, and a ton of fun. Check it out on Bandcamp or on the band's website.